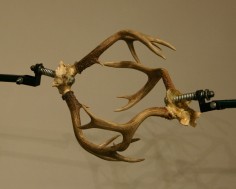 Internationally known artist Brandon Vickerd’s presentation ‘Champions Of Entropy #3′ at Definitely Superior Art Gallery comprises of two fully functioning robotic machines, whose sole purpose is to replicate the organic movements of two male deer locked in constant combat. Purposely diverse, Vickerd’s work is an examination of sculpture as a catalyst for critical thought, enriching the audience’s engagement with the physical world through the creation of spectacle. Vickerd is a professor at York University, Toronto and has an extensive CV.
.
.
.
.
.
.
.
source: brandonvickerd

Purposely diverse, my work straddles the line between high and low culture, acting as a catalyst for critical thought and addressing the failed promise of a modernist future predicated on boundless scientific advancement. Whether through craftsmanship, the creation of spectacle, or humour, my goal is to provoke the viewer into questioning the dominate myth of progress ingrained in Western world views.

A satellite resting lifeless in a crater, recalling a modern day Icarus whose faith in technology lead to hubris and imminent demise as he fell back to earth; a ghost clad in chrome, cloaked in the reflective guise of the machine it seems fit to haunt; machines sporting deer antlers and locked in never ending combat – these are just some of the motifs I utilize to articulate my concerns about technology and failure. Elements of this work appear as wonderfully crude relics of past visions of the future, as vehicles or potential doomsday weapons mirroring the excesses of the cold war and the space race, while also recalling proto-modernist sculpture of the same period. I attempt to highlight our nostalgia for a past, when science held the promise of a limitless future, and not the very strange and often frightening world of tomorrow we find ourselves living in today. My work is a lexicon of no-longer-relevant representation created with a critical eye towards modernism, but also empathy for a tarnished idealism.

In the past several years my exhibited projects have been diverse in form and content, including site specific interventions, kinetic sculpture, public performances and object based sculpture. My public installations deliberately do not reveal themselves as sculpture, but seek to insert an anomaly into the viewer’s experience of the everyday. Projects such as Northern Satellite trigger a discourse centered on our conflicting ways of understanding landscape by creating a narrative where a Global Positioning Satellite has collided with the earth. In gallery exhibitions I engage the audience through employing the language of monumental figurative sculpture by subverting dominant cultural narratives by creating monuments to popular culture characters (Dead Astronaut, …he was turned to steel…”), or by subverting expectations of the monument through intervention (Columbus).

My most recent series Chopper evolved from my training in custom motorcycle shops, where I engaged new materials and processes gleaned from masters of the craft. Chopper borrows from motorcycle culture, mimicking the sparse exoskeletons of 1960s machines. Providing a feeling of propulsion, the sculptures in this series seem to be haunted by a lapsed future. In the gleaming hardness of custom paint and polished steel is the faint reflection of the failed project of the futurists and utopian dreamers.
.
.
.
.
.
.
.
source: fineartsyorkuca

Brandon Vickerd is a sculptor whose exhibited projects are diverse in form and content, including site specific interventions, public performances and object based sculpture. Projects such as Dance of the Cranes (Toronto, 2009) and Dance of the Cranes – Brooklyn (2012) seek to transform the cityscape into a stage for performance through choreographed dances executed by high-rise construction cranes perched upon condos developments while viewers watch from the street below. Public works such as Northern Satellite (Dawson City, 2009) and Satellite (Kitchener 2009) are attempts to engage the viewer in a discourse centred on our conflicting ways of understanding landscape by creating a narrative where a Global Positioning Satellite that has apparently collided with the earth. In gallery exhibitions he engages the audience through employing the language of monumental figurative sculpture subverting dominant cultural narratives by creating monuments to popular culture characters (Dead Astronaut, Chrome Ghost).

Purposely diverse, Vickerd’s work straddles the line between high and low culture, acting as a catalyst for critical thought and enriching the audience’s engagement with the physical world. Professor Vickerd’s research has won support from the Canada Council for the Arts, the Ontario Arts Council, the Toronto Arts Council and the Social Science and Humanities Research Council (SSHRC). In 2005 Vickerd was awarded a major grant by the Canadian Foundation for Innovation to create the Digital Sculpture Laboratory [see story] in the Department of Visual Arts at York. The first of its kind in Canada and one of only a handful worldwide, the laboratory is dedicated to studying the convergence of the digital and the physical in art through the translation of digital code into physical reality. This cutting-edge research facility will adds an exciting new dimension to York’s sculpture program, opening up new possibilities for teaching, learning and creative work.

Prior to his appointment at York University , Professor Vickerd taught at the Nova Scotia College of Art and Design and the University of Victoria, and served as head research/sculptor at Heavy Industries in Calgary (AB), where he assisted in the creation of CNC technologies and 3D scanning systems for use in fine arts production. He joined the faculty in York’s Visual Arts Department in2004.

As a sculptor, I am interested in objects that act as catalyst for an anti-environment – a mindset or space that is not defined, and therefore, infinite in possibilities.

The human tendency towards ordering has become an extension of ownership – to understand opens up the possibility of manipulation.

Sculpture works in opposition to this.

Sculpture is a demonstration of entropy – entropy being the measurable amount of disorder within any system. The system, in this case, is all order. Sculpture is potentially anarchy. The sculptural object is a celebration of wavering logic and structure, exposing the eminent disorder within all systems.