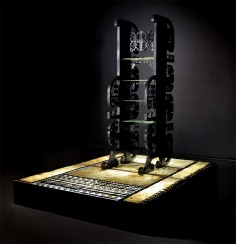 Working in sculpture, game design, installation, performance, sound and the internet, Portland-based artist Brenna Murphy is interested in digital technology’s capacity to connect and expand human consciousness. For Murphy, digital tools act as an electronic prosthesis that deepens awareness and cognition, rather than as an alien entity outside human experience. The labyrinth is an ongoing theme in Murphy’s practice. Her installations, websites, and virtual environments are set up as a series of interlocking spaces that encourage wandering, displacement and discovery. Like the naturally occurring geometric forms referenced in her work, they organically branch out from each other as a dense array of unfolding structures. The title for her exhibition at YBCA, Liquid Vehicle Transmitter, alludes to the fluid property found in much of Murphy’s output.

For her new installation, emergent entity chant array, Murphy has designed a type of fractal involving self-similar patterns at varying scales. Constructed out of a precisely configured assemblage of 3D printed sculptures, LED lights, light boxes, and wood cut forms, the installation resembles a real life version of her complex and dizzying internet-based works. Like Murphy’s virtual video game environments, emergent entity chant array plays upon the visitor’s perception of both space and dimension, encouraging the exploration of elevated states of consciousness.

Deeply post-humanist in her approach, Murphy views her creative process as a form of meditation in which she seeks an intuitive, harmonious relation with the tools used to produce her work. Her intricate arrangement of forms focuses her own energy and that of the viewer, drawing them in. This sense of an attuned connection with an audience is also an active element in the art collectives of which she is a member, MSHR and Oregon Painting Society.
.
.
.
.
.
.
.
source: bmruernpnhay

Brenna Murphy begins each new work with a digital image file and proceeds to manipulate it across multiple applications—Photoshop, Blender, After Effects, and more—to create a unique, artificial aesthetic. Patterns recur at various scales, imbuing her structures and environments with a mesmerizing, hallucinatory effect. We are invited to negotiate our own place within this realm, and sync in. Recalling the kinds of interactions with digital screens that have now become second nature—zooming, clicking, scrolling—Murphy’s video games, mindbending prints, websites, and intricate installations require us to physically, mentally, and visually navigate a terrain. The artist often refers to the structure of the labyrinth as a central concept across her multidisciplinary output, and its logic is a major factor in dictating the viewer’s orientation within a work. According to the historian Penelope Reed Doob, author of The Idea of the Labyrinth: From Classical Antiquity through the Middle Ages, labyrinths can typically be categorized into two forms: the unicursal, which follows a single twisting path toward a center, and the multicursal, where the wanderer goes through a mazelike puzzle of possible paths. Murphy’s YBCA exhibition, Liquid Vehicle Transmitter, seems to offer up yet another form, the emergent labyrinth. It transports the visitor to an alien universe where obsessively detailed compositions morph and slide into one another. Like the strange, shifting interiors found in the video game exhibited in this show, Nightscape Navigator, new things appear as you move forward. The path is never set, but seems to reconstitute itself afresh as you take each next step. “Emergence” is a term used in systems theory to refer to the idea that complex systems yield a process of self-organization, whereby patterns manifest out of randomness. Murphy seems to filter this notion into her approach, enabling constantly evolving systems of heterogeneous elements to resolve themselves into their own, self-generated order. The emergent quality apparent in Murphy’s labyrinthine constructions parallels her own creative process, which encourages mental exploration and spontaneity. The artist does not segment her output into discrete projects, but rather envisions all of her works as part of a larger, continuous production. Her process is a constant flow in which she seeks to operate instinctively with her digital tools. She is very interested in various forms of meditation. She compares her use of symbols to the ancient Hindu practice of yantra, in which an intense focus on a symbol or geometric figure can open up the mind or tap into different energy planes. Describing how she creates her textures, shapes, and arrangements, Murphy says, “Organizing units into repetitive, intuitive patterns is a totally blissful, trance-inducing activity for me. It feels so automatic, just emptying my mind and switching on a channel that is completely focused on balance.”1 Her complex compositions draw on her own concentration and that of the viewer, in a collaborative unfolding.
Like all of Murphy’s work, her new installation emergent entity chant array seeks an attunement with the viewer. Dizzyingly intricate, it permits multiple entry points on the visual, physical, and sonic registers. Murphy’s interest in audience engagement also informs her involvement in two different art collectives, MSHR and Oregon Painting Society. These groups use unique handmade electronic instruments to experiment with performance, sound, sculpture, and installation. They transform the surrounding environment into another domain, bringing about transcendent happenings that test the audience’s sense of reality. The varied menu of experiences to be found in Murphy’s installations and performances invites reflection on the philosopher Mark Hansen’s concept of the “digital image.” As Hansen explains in his book New Philosophy for New Media: “The image can no longer be restricted to the level of surface appearance, but must be extended to encompass the entire process by which information is made perceivable through embodied experience.”2 In short, the digital image is a multilayered, flexible process, and it becomes discernible through the body’s porous interchange with technology. Process becomes the space of perception. The fluidity that informs Murphy’s practice parallels the flux of the digital image itself. Nothing is discrete, and everything leads to another open door.