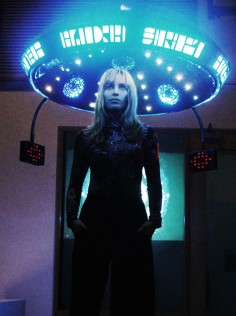 THE MIND CUPOLA, Affective Environment 2008
The MIND CUPOLA interactive media art work attempts to produce a unique experience guiding it’s user to a state of mind entitled ‘equilibrium’. This is achieved by the user’s physical and emotional interaction with both the immersive graphical visualisation and the interactive cupola hardware, through the use of facial and head motion and constant feedback readings of their facial temperature. According to the head movements the visualisation displays ordered or disordered fractal-like particles which the spectator can transform into textual messages describing elements of their current state or advising them of actions to take to lead them into the pure state of ‘equilibrium’.The ‘equilibrium’ state is achieved when the user is fully immersed into the aesthetic interaction of the Mind Cupola, creating a conscious state of mind and bodily interaction.
.
.
.
.
.
.
.
source: thishappenedorg

Brigitta Zics is an artist, interaction designer and media philosopher who investigates the creative and affective potential of emerging technologies to develop new ways of communication between human and machine.

Mind Cupola explores the creative potential of eye-movement and applies the philosophical concept of the cognitive-feedback loop to trigger novel aesthetic experiences of the participant.
.
.
.
.
.
.
.
source: ravensbourneacuk

Dr Brigitta Zics is an artist and researcher who is the new Deputy Head of Postgraduate Studies in Ravensbourne. She joined the team after leading on Digital Media research at Culture Lab, Newcastle University.

She brings a strong interdisciplinary approach to digital practice with a focus on practice-based research and creative entrepreneurship. Her main interest is experience-centred design and the exploration of new interaction paradigms through practice. In her teaching and research she is an advocate of ‘thinking through making’ , a hands-on approach to a collaborative and innovation-led practice that generate novel knowledge as well as experimental or polished artefacts.

Dr Zics’ current research topics include somatic and multi-modal interfaces, wearable tactile displays and data visualisation. Her work and research have been broadly published (MIT, Springer) and exhibited (e.g. SIGGRAPH, IMAGINA and ISEA) around the world.