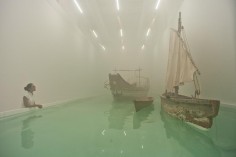 Cai Guo-Qiang was born in 1957 in Quanzhou City, Fujian Province, China. Trained in stage design at the Shanghai Theater Academy, his work has since crossed multiple mediums within art, including drawing, installation, video and performance art. While living in Japan from 1986 to 1995, he explored the properties of gunpowder in his drawings, an inquiry that eventually led to his experimentation with explosives on a massive scale and to the development of his signature explosion events. Drawing upon Eastern philosophy and contemporary social issues as a conceptual basis, these projects and events aim to establish an exchange between viewers and the larger universe around them, utilizing a site-specific approach to culture and history. He currently lives and works in New York.

Cai was awarded the Japan Cultural Design Prize in 1995 and the Golden Lion at the 48th Venice Biennale in 1999. In the following years, he has received the 7th Hiroshima Art Prize (2007), the 20th Fukuoka Asian Culture Prize (2009), and AICA’s first place for Best Project in a Public Space for Cai Guo-Qiang: Fallen Blossoms (2010). He also curated the first China Pavilion at the 51st Venice Biennale, 2005, and held the distinguished position as Director of Visual and Special Effects for the opening and closing ceremonies of the 2008 Summer Olympics in Beijing. In 2012, Cai was honored as one of five Laureates for the prestigious Praemium Imperiale, an award that recognizes lifetime achievement in the arts in categories not covered by the Nobel Prize. Additionally, he was also among the five artists who received the first U.S. Department of State – Medal of Arts award for his outstanding commitment to international cultural exchange.

Among his many solo exhibitions and projects include Cai Guo-Qiang on the Roof: Transparent Monument, Metropolitan Museum of Art, New York, 2006 and his retrospective I Want to Believe, which opened at the Solomon R. Guggenheim Museum, New York in February 2008 before traveling to the National Art Museum of China in Beijing in August 2008 and then to the Guggenheim Bilbao in March 2009. In 2011, Cai appeared in the solo exhibition Cai Guo-Qiang: Saraab at Mathaf: Arab Museum of Modern Art in Doha, Qatar, his first ever in a Middle Eastern country.

In 2012, the artist appeared in three solo exhibitions: Cai Guo-Qiang: Sky Ladder (Museum of Contemporary Art, Los Angeles), Cai Guo-Qiang: Spring (Zhejiang Art Museum, Hangzhou, China), and A Clan of Boats (Faurschou Foundation, Copenhagen, Denmark). His first ever solo exhibition in Brazil, Cai Guo-Qiang: Da Vincis do Povo, is currently on view in Brasilia at the Centro Cultural Banco do Brasil and Museu dos Correios. A three-city exhibition, Da Vincis do Povo will also travel to São Paulo and Rio de Janeiro in spring and fall 2013. His next exhibition, Cai Guo-Qiang: Falling Back to Earth will open November 2013 at the Queensland Art Gallery | Gallery of Modern Art in Australia.
.
.
.
.
.
.
source: glanceit

In this installation called Endless, New York-based artist Cai Guo Qiang creates a calm atmosphere where classic wooden ships float along green, foggy waves of water. The ships appear to be drifting, lost, in the middle of the sea while a wave machine produces calm waves and a fog machine fills the room with a fuzzy haze. As the vessels rock slowly and endlessly in the water, viewers will find themselves in a quiet, reflective atmosphere.

The artist incorporates two kinds of ships as a statement of two worlds interacting. Two Houri boats, typically seen around the Gulf region, span about 244 inches long each, while one Chinese fishing boat, used for centuries around Qanzhou, spans 800 inches long. The calming environment created by Cai Guo Qiang sparks meditative thoughts of ancient cultures and traditions coming together in one place, as the physical representation of two worlds, East and Middle East, float side by side in an endless sea of peaceful motion.
.
.
.
.
.
.
.
source: vintika