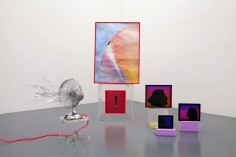 Cécile B Evans’ practice examines the way in which contemporary society values emotions. It often challenges ‘objective’ social values, governed by commonly acknowledged standards and expressed in mutually agreed upon forms, favouring personal experience and the subjective. She is interested in the tension between “what goes on in your head, really, and in your heart, really” (Robert Brenton and David Newman, ‘the new Sentimentality’, 1964) and a modern society that has consistently attempted to define self-expression in hierarchical terms, further supported by the democratising effects of digital technology..

Evans made a series of collages in 2011 that each feature an under-exposed still from various Meryl Streep films, all zoomed in on an impending kiss between the actress and her leading man. These works point towards the quantification of the supposedly unspeakable that strategically informs Hollywood’s deployment of intense emotion. But by naming the works after the tear-jerking line that has made these dramas classics, she also points at an iconography of emotion that is founded in fundamental truth.

Evans’ new series Lower Pop, presented at Open Heart Surgery, investigates the aftermath of that collective tremor. Shortly after the release of the 1982 film, in which Streep is forced to choose one of her children and condemn the other to death, a trend broke where people would sarcastically refer to superficially difficult decisions as ‘a Sophie’s choice.’ the artist uses her own shade of pink, named ‘Lower Pop,’ in works that re-stage the contradictory co-existence of sincerity and mawkish artificiality that characterises contemporary understandings of sentimentality.

Evans’ work links the uneasy dialogue created by the ineffable and the literal in the representation of emotion to the interplay of the digital and physical realms. Evans explores a networked mode of subjectivity in her video work Straight Up (2011), part of a trilogy completed by Countdown (2012) and I Have Nothing (x). In this work the artist uses her body to sign the common-denominator, hard- on-the-heartstrings emotive lyrics of a Paula Abdul song. Her movement generates stars and bubbles on the screen behind her as overblown music plays. This work places the body at the centre of an idiosyncratic affective matrix of the virtual and the real.

Cécile B. Evans, born 1983, is a Belgian American artist based in London and Berlin. She is the 2012 recipient of the Emdash Award, which resulted in a commissioned work for the Frieze Art Fair in London. She is also the 2013 recipient of the PYA Prize, which will result in the production and exhibition of a new video work at the Palais de Tokyo (Paris) in november. upcoming exhibitions include Bold tendencies 7 (London), a digital commission from the Serpentine Gallery (London), and a residency at Wysing Arts centre (Cambridge). Previous exhibitions have included the Palazzo Peckham (Venice), a performance at Palais de Tokyo contemporary Art Museum (Paris), a solo presentation for PAMI with Son Gallery, How to Eclipse the Light curated by Karen Archey, Wilkinson Gallery (London), Spencer Brownstone Gallery (NY, Solo), Bergen Art Museum (NO).
.
.
.
.
.
.
.
source: spencerbrownstonegallery

Cécile B. Evans was born in 1983, in The United States of America and lives and works in Berlin, Germany. She received her B.F.A. from the Tisch School of the Arts at New York University. Evans has participated in exhibitions at the Bergen Kuntsmuseum, Norway; Exit Art in New York City and the Grimmuseum, Berlin, Germany.
.
.
.
.
.
.
.
source: cecilebevans

Cécile B. Evans is a Belgian American artist based in Berlin and London.

She is the 2012 recipient of the Emdash Award which resulted in a commissioned work for the Frieze Art Fair in London. She is also the 2013 recipient of the PYA Prize, which resulted in the production and exhibition of a new video work at the Palais de Tokyo (Paris). Other previous exhibitions have included How to Eclipse the Light curated by Karen Archey, Wilkinson Gallery (London) and Desire at the Bergen Art Museum (NO).

She was recently an artist in resident at the Wysing Arts Centre (UK) and participated in talks series such as Rhizome’s Seven on Seven at the Barbican (UK), ICA Salon (UK), and Art Basel Miami Beach Conversations (FL).

She is currently working on a long term project with the Serpentine Galleries (UK), AGNES, which is the first of a series of digital commissions by Ben Vickers. Other upcoming events include group exhibitions at Kunstverein Munich (DE) and Wysing Arts Centre.