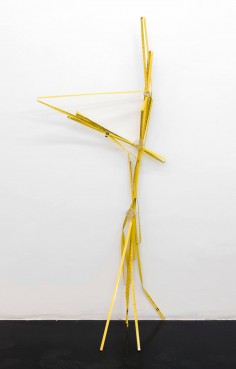 “It can go ‘both ways’. More than one object creates a symmetrical system or self referential unit. Self satisfied / perverse preservation. (Judgemental: should I try to help this man?) I am not really involved in the producers trajectory, I am trying to halt it / atrophy it / recall it. Stop it before it is simply bought, discarded and made again. Make it so it’s now only to be looked at.”
– Chadwick Rantanen
No more worrying about adjusting the lights! That was my first thought. I was staring at an empty shelf in our storage space and realised that I had just lost 30.000 Euros worth of a lighting system; a once state-of-the-art German system of wallwashers, spotlights and highlights with more than 40 meters of tracks to go with that. Which made it difficult to understand how somebody had managed to steal the entire thing and sneak out unseen. But more than worrying about lost property, I relished the prospects of gained time. Nobody likes to spend time lighting a show, you see.
Hence, the next gallery space had fluorescent light fixtures, and two options: on and off. There would be no more fiddling on top of a step ladder, no more burning of fingertips, no more being blinded while finding the perfect angles, and no more being annoyed coming down from the step-ladder only to see a row of cone-shaped shadows along the wall like a ghostly army of Christmas trees. Instead: a dull, democratic and highly undramatic light that came with a matter-of-factness like an amped-up painting by Piero della Francesca. Calibrated at a cool 965 – “Daylight Deluxe” it read on the cardboard packaging – this crystal-clarity would bounce off the white walls, giving equal attention to every detail; “I am not going in there”, she said, “I have a zit on my forehead”. Standing on an icy January pavement she was drinking her beer while witnessing the pale chattering crowd of the preview at a safe distance.
Realism is the neighbour of pragmatism. Aka, look on the bright side: if you can not afford another state-of-the-art German lighting system, get cheap fluorescents. Not only does it come with a leaner price tag, but with that ever so valid reference to the industrial for the culture industry that is art. A certain sense of Sachlichkeit: check. A certain sense of symbolical surplus: check. A whole lot of the arbitrary: double check. This inherent whimsical quality to industry and industrial standards is at the heart of the works of Chadwick Rantanen; a constant seeking out of the tension, balance and frequent imbalance between the readymade and the handmade. Or rather, the logic of industrial production is isolated and slightly perverted to lay the ground for a logic of sculpture production. A slender wedging of form and function with the help of the modified, the adapted, the personalized, the pimped, the DIY-ed, the Nike ID-ed, the made- to-measure, the bespoke. So what do you want to do for this exhibition? I want to adjust the lights.