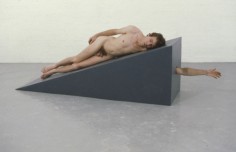 Figurative sculpture is almost as old as the human body but also as new as whatever fresh materials, techniques and meanings artists can rally to their cause. The latest confirmation of this comes from Charles Ray’s new forays into post-Conceptual realism, three works based on actual people (but 10 percent larger) and carved by computer-driven machines from solid stainless steel. Luminous rather than reflective, they form a beautifully spare arrangement in Matthew Marks’s large, nearly empty gallery and produce a cat’s cradle of ricocheting ideas. Their solidity is not immediately apparent, but they sure don’t seem hollow. They are as much heirs to process-oriented Post-Minimal sculptors like Richard Serra and Barry Le Va as to postwar realists like George Segal and Duane Hanson.

They circle ancient themes and conventions. The standing male nude of “Young Man” echoes the pose of the “Kritios Boy,” the early Classical Greek sculpture thought to be the first instance of contrapposto, but he is clearly a 21st-century nerd: unsteady on his feet, with sloping shoulders, incipient love handles and a slightly too-large head, partly a result of thick hair and a full beard. Factor in his open mouth and slightly buck teeth and the figure becomes a study in unwitting insecurity. It implies social notions of manhood as a facade beyond the reach of most men.
.
.
.
.
.
.
.
source: momaorg

American sculptor. He studied for his BFA at the University of Iowa, Iowa City, graduating in 1975, then for his MFA at the Mason Gross School of Art, Rutgers University, NJ, graduating in 1979. Initially influenced by sculptors such as Anthony Caro, by including his own body in his works he made them more like documented performances. In Plank Piece I–II (1973; see 1994 exh. cat., p. 30), for example, he pinned his body to the wall with a large piece of wood. This literalism was manifested in another early photo work, All My Clothes (1973; Los Angeles, CA, Mus. Contemp. A.), in which he presented himself dressed in each of his outfits. By the early 1980s Ray extended this absurdity to generate a more deadpan manipulation of Minimalist iconography. In Ink Box (1986; Newport Beach, CA, Orange Co. Mus. A.), a large cube is filled to the brim with ink, giving the illusion of a solid cube. In the 1990s he used mannequins in his sculptures, for example in Family Romance (1993; E. and P. Norton, priv. col. see 1998 exh. cat., pp. 38–9), where mom, dad, brother and sister are all presented at the same height (the height of the artist), so that the nuclear family becomes a grotesque comment on the illusion of ‘normality’. Ray takes conventions, whether they are from art history or the shop window, and uses them to re-present identity and perception as coded assumptions that can be destabilized with disturbing ease by his deadpan reconfigurations.
.
.
.
.
.
.
source: wtl21blogspot

Charles Ray is a Los Angeles-based sculptor, known for his strange and enigmatic sculptures, which draw the viewer’s judgments into question in jarring and unexpected ways. His wide ranging works tackle themes of body image, childhood and the abstract.

Ray’s work is difficult to classify, Style, materials, subject and scale all vary greatly. However connections can be drawn to ancient themes and reference points. The standing male nude of ‘Young Man’ echoes the pose of the ‘Kritios Boy’ the early Classical Greek sculpture. A further example is “Shoe Tie,” a nude self-portrait of the artist crouching down to tie a nonexistent shoe, which echoes the Roman ‘Boy With Thorn’ bronze sculpture, of a boy withdrawing a thorn from the sole of his foot.

Christopher Knight in the Los Angeles Times wrote that Ray’s “career as an artist…is easily among the most important of the last twenty years.

He plays with his subjects’ proportions, and presents them within the vulnerable setting of the gallery space. Ray invites you the viewer to judge and examine what is before you, and in turn draws on the individual’s critical point of view. Creating a purely individual and unique response to his work. Charles Ray’s work has a subtle uneasiness to it. His pieces alienate his viewers, often striking an uncomfortable voyeurism with the observer.