Voyage on the Planet 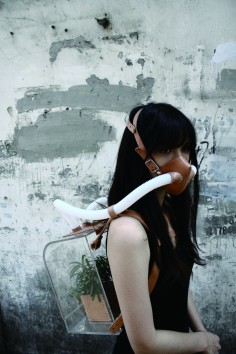 Work: In this planet, the society and culture make changes at every moment, which make people hopeless at first, but may bring about new expectations then. Nobody knows what will happen next. Owing to the subtle and mysterious sense of unknown, we become more curious about the world. Just like exploring the outer space, we take advantage of the equipment to survive and to explore. Don’t be afraid of the tough-look unknown world, go in it.
Photographer: Chiu Chih
.
.
.
.
.
.
.
source: designboom

the deteriorating air quality within crowded living environments and the changing face of the built landscape, has led designer chiu chih to develop ‘voyage on the planet’. the project tackles big questions, focusing on the idea that the world is in a constant state of flux. the subtle mysteriousness of the planet’s unknown future often forces human beings to adapt – and potentially create new equipment just to survive. the design responds to a sense of curiosity towards this ever-changing environment – where old buildings are demolished and new modern ones continue to rise. society and culture modify from one moment to the next, which in some cases chiu chih believes renders people hopeless, while for others it brings about hope and new expectations. the scary nature of this vulnerability is most poignant in the depletion of natural energy resources. ‘voyage on the planet’ brings attention to the sate of the earth, and like new energy that is sought after as a replacement, it raises the question of further exploration and continued survival on the planet.
.
.
.
.
.
.
.
source: newscnet

Designer Chiu Chih imagines a possible future where our cities have fallen into disrepair and the air is poisoned. In this wasteland, a woman wanders through the rubble, breathing with the help of a companion plant.

The project, titled “Voyage on the planet,” consists of a clear box worn like a backpack. Two breathing tubes connect a face mask to the box. Inside, the box holds a potted plant, acting like a portable filter.

This is not a functional device so much as an artistic statement about how humans adapt to survive in the damaged environments of their own making.

‘Conscious Clothing’ measures the junk you’re breathing
Laundry additive turns shirts, pants into pollution eaters
The design looks ripe for a steampunk interpretation adding goggles and other matching gear into the mix, but there’s a certain beauty to the simplicity of the creation as it is, without a lot of distracting doodads. It’s like having a wearable terrarium.
The project showed up through DesignBoom’s DIY submissions from readers. Details on the creator are almost nonexistent. Perhaps this is the start of a fascinating series of designs for a post-apocalyptic society. We’ll keep an eye out.