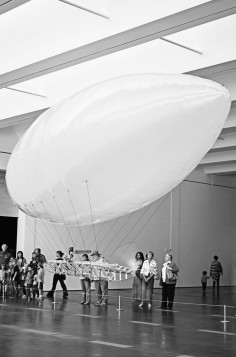 The first museum presentation of the late Chris Burden’s recently completed monumental performance sculpture, Chris Burden: Ode to Santos Dumont pays homage to ingenuity, optimism, and the persistence of experimentation, failure, and innovation. Inspired by Brazilian-born pioneer aviator Alberto Santos-Dumont, widely considered the father of aviation in France, the kinetic airship sculpture was recently completed after a decade of research and work by Burden.

The highly balanced and refined mechanism—modeled after Santos-Dumont’s 1901 dirigible that flew around the Eiffel Tower—achieves indoor flight in 15-minute intervals throughout the day. An examination of weight and gravity, the work is powered by a quarter-scale version of a 1903 De Dion gasoline motor handcrafted by machinist and inventor John Biggs. Ode to Santos Dumont offers a palpable and emotional expression of the density of air, gravity, and energy required to move about in our earthly environment.
.
.
.
.
.
.
.
source: shootngowordpress

“The performing sculpture, Ode to Santos Dumont, pays homage to ingenuity, optimism, and the persistence of experimentation, failure, and innovation. Inspired by Brazilian-born pioneer aviator Alberto Santos-Dumont, widely considered the father of aviation in France and Brazil, the kinetic airship sculpture was recently completed after a decade of research and work by Burden.” The work is powered by a quarter-scale version of a 1903 De Dion gasoline motor handcrafted by machinist and inventor John Biggs.”
.
.
.
.
.
.
.
source: lacmaorg

Late Chris Burden’s monumental performance sculpture, Chris Burden: Ode to Santos Dumont pays homage to ingenuity, optimism, and the persistence of experimentation, failure, and innovation. Inspired by Brazilian-born pioneer aviator Alberto Santos-Dumont, widely considered the father of aviation in France, the kinetic airship sculpture was completed in 2015 after a decade of research and work by Burden.
.
.
.
.
.
.
.
source: eaiorg

Chris Burden first gained international attention in the 1970s as an influential and often controversial figure in the West Coast body art, performance and Conceptual Art movements. Once ironically termed the “Evel Knieval of contemporary art,” Conceptual Art, Burden allowed himself to be shot, crucified, almost drowned and electrocuted.
In 1974, he began working with video, using it as an integral component of his performances, as well as for the documentation of his works and in the production of conceptual TV “commercials.”
In the late 1970s, Burden began producing sculptural objects, installations and technological or mechanical inventions, including the monumental BCar and The Big Wheel. In these extensions of his conceptual works, Burden addresses the artist’s relationship to an industrialized and technological society.
Burden was born in 1946. He received a B.A. from Pomona College, Claremont, California, and an M.F.A. from the University of California, Irvine. The first New York survey of his work, “Chris Burden: Extreme Measures,” opened in the Fall of 2013 at the New Museum for Contemporary Art, New York. A major retrospective of his work, “Chris Burden: A Twenty Year Survey,” was organized in 1988 by the Newport Harbor Art Museum, California. He has performed and exhibited his work internationally, at institutions including MAK-Austrian Museum of Applied Arts, Vienna; Centre Georges Pompidou, Paris; de Appel, Amsterdam; The Tate Museum, London; The Baltic Centre, Newcastle, England; The 48th Venice Biennale, Venice; The Museum of Modern Art, New York; The Museum of Contemporary Art, LA; Museum of Conceptual Art, San Francisco; Hirshhorn Museum and Sculpture Garden, Washington, D.C.; The Institute of Contemporary Art, Boston; Museum of Contemporary Art, Chicago; and the Whitney Museum of American Art Biennial, New York. He is the recipient of numerous awards, including grants from the National Endowment for the Arts and a Guggenheim Fellowship, and taught for many years at the University of California, Los Angeles.
.
.
.
.
.
.
.
source: newyorker

An efficient test of where you stand on contemporary art is whether you are persuaded, or persuadable, that Chris Burden is a good artist. I think he’s pretty great. Burden is the guy who, on November 19, 1971, in Santa Ana, California, produced a classic, or an atrocity (both, to my mind), of conceptual art by getting shot. “Shoot” survives in desultory black-and-white photographs with this description: “At 7:45 p.m. I was shot in the left arm by a friend. The bullet was a copper jacket .22 long rifle. My friend was standing about fifteen feet from me.” Why do such things? “I wanted to be taken seriously as an artist,” Burden explained, when I visited him recently at his studio in a brushy glen of Topanga Canyon, where he lives with his wife, the sculptor Nancy Rubins. “The models were Picasso and Duchamp. I was most interested in Duchamp.” Burden is a solidly fleshy, amicable man, given to arduous enthusiasms. Arrayed in ranks outside the vast, tidy studio building were more than a hundred and forty handsomely restored antique lampposts, units of an ongoing sculptural project. (Many are intended for the grounds of the Los Angeles County Museum of Art, when its present expansion is completed, in 2008.) Reinstallations of two major Burdens are now on view in Southern California: “A Tale of Two Cities” (1981), a room-filling fantasy tableau of miniature metropolises at war, incorporating about five thousand toys, at the Orange County Museum of Art, in Newport Beach; and, at the Museum of Contemporary Art, in Los Angeles, “Hell Gate” (1998), a twenty-eight-foot-long scale model, in Erector and Meccano pieces and wood, of the dramatic steel-and-concrete railroad bridge that crosses the Hell Gate segment of the East River, between Queens and Wards Island. Like most things by Burden, they are powerful works that deal ingeniously with aesthetics and ethics of power. You needn’t like them to be impressed.

“Shoot” was one of a number of perfectly repellent performance pieces of the early nineteen-seventies in which Burden subjected himself to danger, thereby creating a double bind, for viewers, between the citizenly injunction to intervene in crises and the institutional taboo against touching art works. (Such, at any rate, was my analysis of the distinctive nausea that I felt in thinking of those things, which I avoided witnessing in person.) He spent five days in a small locker, with a bottle of water above and a bottle for urine below; slithered, nearly naked and with his hands held behind him, across fifty feet of broken glass in a parking lot; had his hands nailed to the roof of a Volkswagen; was kicked down a flight of stairs; and, on different occasions, incurred apparent risks of burning, drowning, and electrocution.

Usually performed for small audiences, these events became word-of-mouth sensations on a radically minded grapevine in art schools, new contemporary museums, and grant-funded alternative spaces—an emerging academy of the far out. Anti-commercial sentiments held sway in those circles, although not altogether heroically, given the concurrent slump in the art market and the flow of patronage from such sources as the National Endowment for the Arts. (Between 1974 and 1983, Burden received four N.E.A. grants.) Earthworks, executed in remote locations, were the conceptual art that came closest to being popular. They had in common with Burden’s performances the fact that almost nobody saw them, except by way of documentation. The avant-gardism of the time wasn’t only reliant on publicity; it was effectively about the mediums of information—specialized magazines, insider gossip—through which it became known. Burden strummed the network like a lyre.

Burden was born in Boston in 1946, to an engineer father and a mother who had a master’s degree in biology, and he grew up in France and Italy. At the age of twelve, on the island of Elba, he was badly hurt in a motor-scooter accident, and underwent an emergency operation on his left foot, without anesthesia. It was a formative experience, he said, as was a passion for photography, which he acquired during his long recuperation. He completed high school in Cambridge, Massachusetts. At Pomona College, in Claremont, California, he declared an architecture major and studied physics, but gravitated toward art, with a special interest in Dadaism. Burden’s master’s thesis, at the University of California, Irvine, in 1971—where his teachers included the doyen of space-and-light installations, Robert Irwin—was the five-day locker stint.

He was immediately taken very seriously, as the most extreme and enigmatic of provocateurs in a subculture that, in highly educated ways, reflected the political disarray of the nation during the seemingly eternal Vietnam War, and prefigured the swing-barrelled rage of punk. By 1977, he had created performance pieces in two dozen American and European cities. They constituted a theatre of passive-aggressive cruelty. For one, in 1972, in Newport Beach, he sat immobile in a chair, wearing dark glasses, facing two cushions and an inviting box of marijuana cigarettes. Visitors naturally assumed that he was watching them, but the insides of his glasses were painted black, and he refused to speak. He reported, in his record of the work, “Many people tried to talk to me, one assaulted me and one left sobbing hysterically.” Plainly, Burden was not in sympathy with his supposed community.

Burden’s most trenchantly significant work was “Doomed,” performed in April, 1975, at the Museum of Contemporary Art in Chicago. He set a clock on a wall at midnight, and lay down on the floor under a leaning sheet of glass. Viewers came and went. Burden didn’t move. Inevitably, he soiled his pants. (“It was awful,” he recalled.) Forty-five hours and ten minutes passed. Then a young museum employee named Dennis O’Shea took it upon himself to place a container of water within Burden’s reach. The artist got up, smashed the clock with a hammer, and left. He never again undertook a public action that imperilled himself. It wouldn’t have made sense. “Doomed” unmasked the absurdity of the conventions by which, through assuming the role of viewers, we are both blocked and immunized from ethical responsibility. In O’Shea’s case, the situation was complicated by his duty to maintain the inviolability of art works. There should be a monument to him, somewhere, which would commemorate the final calling of the bluff of art as a law unto itself. (Would Burden have lain there until he died? “Probably not,” he said.) I have in mind Robert Rauschenberg’s famous intention “to act in the gap between” art and life. There isn’t any gap. Art is notional. There is always only life and death.
.
.
.
.
.
.
.
.
source: artigostolprobr