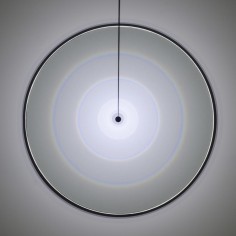 Chris Fraser’s current show In Stereo is an experience. This isn’t some hack journalistic turn of phrase. The bulk of his work exists — literally — in an experiential space between you and the objects he creates. His works operate by projecting dimensional halos, the sensation of which falls somewhere between a rainbow seen at a distance and a 3D movie viewed from the front row. Halos, in Fraser’s handling, are a perspectival phenomenon; they shift and change shape as you move about the room. The images are stereoscopic. Meaning, they cannot be represented by a photo or a moving image shot with a single-lens camera. It doesn’t take long before you notice that the messages received by your eyes fail to match the contents of the room. Fraser’s art, in other words, demonstrates how the mind selectively edits sensory input.
Some background: Fraser has been known in the past for his work with camera obscuras. By carefully controlling the light entering a room or an apparatus, he was able to create unique and challenging installations that change hue and shape as light, usually streaming through a window, shifted over time. In this body of work, Fraser does away with the apparatus and fixes the light source, making you the agent of change. To a limited extent, Fraser’s work resembles Robert Irwin’s and that of other Light and Space artists. But fundamentally Fraser isn’t expressing ideas about light; he’s grappling with the limitations of seeing. He wants us to notice what we edit out in the mistaken belief we’ve seen it all before. Cone, 2013, microsopheres, plate glass, aluminum, LED pendant 48 x 1″. Like David Hockney’s photo collages and multi-camera “cubist movies,” Fraser’s works remind us that perception changes with perspective; it adds in some things, subtracts others, but in the end, its default mode is to simplify for survival’s sake. Fraser’s work reveals the strange consequences. The core components of his works are glass microspheres – the same particles that give crosswalks a reflective shimmer. Embedded in acrylic paint, as in the white canvases of Mary Corse, they reflect light back at its source. Fraser first discovered these properties when a crew of crosswalk painters spilled thousands of them on the pavement. Like raindrops, the unblemished spheres scattered light from the sun in rainbows that appeared on the ground. They were visible, but only at a certain angle. Fraser spent the next six months in his studio trying to recreate and amplify this experience.
Emmanuelle, a large, slightly curved piece of aluminum with a bowl-like rim, is representative of the works on view. It contains thousands of microspheres, applied like a layer of paint. But they are not, as in Corse’s paintings, fixed in any medium; they simply rest on the surface. (A sheet of glass keeps them intact when the piece is hung on the wall.) Activated by a single, focused, white LED light suspended from the ceiling in front of the piece, it projects a halo outward, regardless of viewing angle. Other pieces, like Cone, employ more lights, and from them come more haloes still. Anyone who’s seen a rainbow has witnessed this phenomenon, but few know why it occurs. Fraser’s point is that we spend most of our waking hours looking, but we are rarely mindful of what we’re really seeing.

That said, here is a simple prescription for viewing this show: close one eye before you walk into the gallery and keep it closed until you have gotten a good, long look. Once you feel you understand the nature of the objects in the room, open your other eye. The art will change, and it will not go back to the way it was earlier – even if you re-close your eye. Your understanding of the work will have changed, and with it the phenomenon of vision: proof that seeing is composite and mutative.
.
.
.
.
.
.
.
.
.
.
source: noteshusk

The pieces that make up most of Chris Fraser’s show at Highlight involve one or more carefully suspended LED lamps training their light on a circular “target” covered with granular reflective material.

In “Cone” (2013), three lamps align back-to-back and their refracted light creates the illusion of concentric cones, with little rainbows at their perimeter.

It’s impossible to convey what this is like from photographs. There’s a three-dimensionality to the work that requires you to be in its space, seemingly intruding on the visual cones (even though you’re interacting with just photons, not matter).

It’s a work that reminds me of some of Olafur Eliasson’s pieces, and that’s a high compliment. I’d say it’s worth spending a few minutes going out of your way to see this; the gallery’s at the Market end of Kearny Street, between Montgomery and Powell BART / Muni stations.
.
.
.
.
.
.
.
source: sfgate

The pieces that make up most of Chris Fraser’s show at Highlight involve one or more carefully suspended LED lamps training their light on a circular “target” covered with granular reflective material.

In “Cone” (2013), three lamps align back-to-back and their refracted light creates the illusion of concentric cones, with little rainbows at their perimeter.
.
.
.
.
.
.
.
source: hyperallergic

In Stereo, an exhibition of new works by Bay Area-artist Chris Fraser at Highlight Gallery, plays with the ways our eyes perceive space. His sculptures occupy three-dimensional space, but something feels different. As you walk around each object you realize the light is playing tricks with your eyes and creating spaces and experiences that are not physically present in a material sense but very much present through our perceptions of light. “Open one eye and light becomes image. Open both and it becomes space,” noted Fraser in a statement he shared with Hyperallergic. But as he pointed out, the stereo vision with which we see the world can sometimes falter. Anyone who’s watched a 3D movie knows that the eye can perceive three dimensional space even when there’s no physical object present.

It’s difficult to describe Fraser’s work without seeing them in person; even photos, which by their nature are monoscopic, can’t capture the stereoscopic quality of the experience. “Emmanuelle” (2013) creates the sensation of a halo around an LED, but as you approach the object or swivel to the side, the scope of the halo shifts more than your brain expects. “Cone” (2013), with three lights in sequence, makes you want to extend your hand and touch the beams and circles in space, but as you do, there’s nothing to grasp. As Fraser noted in his statement, “Vision does not verify or report on the real. In a very real sense, it creates it.”

Fraser describes his making process for this particular show as an accident, as he played around with materials in his studio. “I was throwing materials together in the studio,” he said, “hoping something good would happen. That type of desperation is usually counterproductive. But on this occasion it worked.” With a light bulb in front of glass, he saw the eventual object he would iterate on, leading to the current installations, which use cleverly-arranged glass to create the experience.

I hesitate to share this detail and want to be clear it’s not a critique, but an insight: on opening night, the doors opened late, and visitors standing outside could see Fraser and team on ladders, carefully — very carefully — arranging the works in place. “While the conceptualization of a work is often easy,” he explained, “the execution can be painstaking.” For the patient viewer, it was well worth the wait.