n-Polytope: Behaviors in Light and Sound after Iannis Xenakis 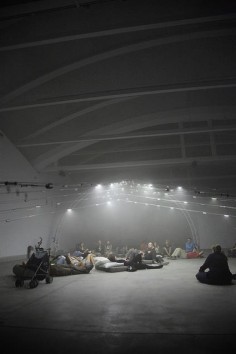 source: laboralcentrodearteorg
Starting on Friday 20 July, the North American artist and researcher Christopher Salter along with his collaborative partners in this project -Sofian Audry, Marije Baalman, Adam Basanta, Elio Bidinost and Thomas Spier – presents n-Polytope: Behaviors in Light and Sound after Iannis Xenakis at LABoral – a large-scale audiovisual performance-installation employing today’s existing technology to reinterpret and adapt the spectacular architectural environments imagined by the Greek architect and composer Iannis Xenakis in the 1960, 70s and 80s of the last century.

Salter Salter and his international team has been completing a production residency at LABoral, since the end of June in order to develop the work which will be presented in the Galería de Exposiciones [Exhibition Gallery]. n-polytope will be on exhibit until 10 September in the Galería de Exposiciones at Gijón’s Centro de Arte y Creación Industrial as a precursor to its presentation in other international artistic spaces.

The design and final construction of the installation by Salter, who is exhibiting his artwork for the first time in Spain, was made possible by an alliance of collaborating between entities and institutions from different countries, with the Centro de Arte y Creación Industrial acting as the unifying agent. In this way, the coproduction between LABoral and the Canadian studio-laboratory LabXModal has been complemented by the financial support of Fonds de recherche du Québec-Société et culture [Quebec Research Fund for Society and Culture](FQRSC), Canada, by the German engineering consulting firm Schlaich Bergermann & Partner, by STEIM (STudio for Electro Instrumental Music) from the Netherlands and by the Spanish company Fomento de Construcciones y Contratas.

n-Polytope: Behaviors in Light and Sound after Iannis Xenakis is a contemporary re-imagining of the Greek composer and architect Iannis Xenakis’s radical architectural environments called Polytopes (from the Greek poli, ‘many’ and topos, ‘space’). The first of these spaces, articulated through light and sound, was presented at the Expo’67 in Montreal and subsequently in Europe and the Middle East in the 1970s and 80s. Through the temporal dynamics of light and sound, these installations evoke the indeterminate and chaotic behaviour of nature: rivers, clouds, waves and cosmological phenomena. Reinventing these polytopes goes far beyond a simple historical exercise given that they represent seminal works in the history of new media and of which, still to this day are little known outside of contemporary music circles.

Xenakis creation of dense artistic experiences that fundamentally analyse and model the behaviour and patterns of nature and the cosmos in their fluctuations between order and disorder evoke, without doubt, the instability of the present moment. The visitor will thus enjoy a strange, flickering, unstable experience; one of intense beauty achieved by the light and sound-constructed ambience.

Chris Salter and his team of collaborators have worked during his residency at LABoral to bring the final phase of the project to a close: the construction of the performance and installation for the public.

Chris Salter is an artist, Associate Professor for Design + Computation Arts at Concordia University in Montreal and Director of the Hexagram Concordia Centre for Research-Creation in Media Arts and Technology.

He studied philosophy, economics, theatre and computer music at Emory and Stanford Universities. After collaborating with Peter Sellars and William Forsythe/Ballett Frankfurt, he co-founded and directed the art and research organization Sponge (1997-2003). His solo and collaborative work has been seen all over the world at such venues as the Venice Architecture Biennale, National Art Museum of China, CTM, Ars Electronica, Meta. Morf in Norway, PACT Zollverein, Todays Art, Villette Numerique, EMPAC, Transmediale, EXIT Festival, Place des Arts, Elektra, Shanghai Dance Festival, V2_, among many others. He is the author of Entangled: Technology and the Transformation of Performance (MIT Press, 2010).

n-Polytope: Behaviors in Light and Sound after Iannis Xenakis

THE COLLABORATORS
Fomento de Construcciones y Contratas (FCC), world leading company in environmental services, infrastructures and renewable energies, is a founding member of the Board of Trustees of the Fundación La Laboral Centro de Arte y Creación Industrial since its formation. FCC has built a large structure comprising three connection points for the suspension of 22 steel cables extending across the exhibition space from a height of five metres to the floor and forming 180-degree angles that occupy eight metres of space on the floor.

This structure, specially designed and built to be easily transportable, is very light which, along with its dismantling into small pieces, will facilitate its use for while n-polytope is on tour at various centres where it will be exhibited.

Fonds de recherche du Québec-Société et cultura [Québec Research Fund for Society and Culture] is a Quebec based organisation dedicated to the development of research and innovation in human and social sciences, arts and humanities. To this end, it financially supports research and the training of experts in these areas with the purpose of promoting the dissemination and transfer of knowledge.

Schlaich Bergermann und Partner is a consulting firm that operates in the classic as well as specialized fields of structural engineering. Their focus lies on light-weight structures in bridge design, membrane and cable structures, glass architecture and all related fields. Open to all kinds of materials as well as to innovations, they look for solutions that suit a building project technically, economically and ecologically.

labXmodal is a studio-lab founded by Chris Salter dedicated to the research, development, and creation of performative environments – physical spaces with a focus on dynamic and temporal processes over static objects and representations.

STEIM (STudio for Electro Instrumental Music) is a centre for research and development of new musical instruments in the electronic performing arts, located in Amsterdam, the Netherlands. Electronic music in STEIM’s context is always strongly related to the physical and direct actions of a musician. In this tradition, STEIM supports artists in residence such as composers and performers, but also multimedia and video artists.

150, 10 Watt LED’s and 50 tiny speakers are suspended on 24, 20+ m stretched aircraft cables which form a ruled surface. While the behavior of the LED’s create a changing space of bursting points, coloured lasers that bounce off the surface of fixed and changing mirrors generate fleeting architectures of lines and shapes that flicker and disappear before the visitors’ eyes. Counter-pointing the visual scenography, multi-channel audio from the small speakers as well as the larger environment shifts between sparse natural and dense electronic textures. Across the architectural cable structure, the network of tiny speakers produce the behaviours of mass sonic structures made up of many small elements (sonic grains) creating swarms of tiny sounds that resemble a field of cicadas or masses of insects – akin to Xenakis’s interest in the stochastic movement of mass structures.

The re-imagining runs in both 15 minute performance and continuously evolving installation modes. The system is steered through a custom developed wireless sensor network utilizing machine learning techniques, specifically from the research area of reinforcement learning in which software learning agents interact with their environment in order to achieve a goal. The agent seeks to achieve its goal despite the fact that there is a high degree of uncertainty about the environment – in other words, the agent doesn’t know until it does something and is then “rewarded” in either a positive or negative manner. In N_Polytope, agents receive sensor-actuator information from the environment (the brightness of an LED and the frequency/amplitude of a sound) and can either turn the LED or the sound on or off, receiving a reward for it. However, the environment around the agent (and the sensor) is continually changing, which makes it challenging to determine what steps the agent will take and what such actions will result in. The agent’s actions thus influence not only the state of the environment in the present but also can affect the environment’s state in the future.

The overall course of N_Polytope is that of an event that is partially scripted and partially indeterminate thus enabling the performance to continually move between order and disorder, tranquility and thundering chaos. The audience “feels” these algorithms as two forms of “life” – the behaviors in light and sound and the “life” of experiencing such a system evolving in the present.