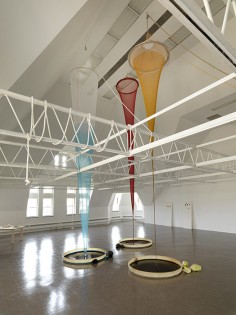 Christina Mackie’s sculptural installations weave an intricate web of associations between their diverse physical components, which comprise natural, man-made and crafted elements. Holding an inherent respect for her materials and an intuitive understanding of the way things work, Mackie’s creative processes are often directed by what something can be made to do. Both personal and complex, her works are imbued with her own experience of the world and her private thought processes. This year Christina has had exhibitions in Turin, London and Amsterdam. She recently participated shows in Pakistan, at Tate Britain and the De la Warr Pavilion, Bexhill as well as the Busan Biennale in Korea.
.
.
.
.
.
.
.
source: renaissancesocietyorg

Colour drop, a solo exhibition of new work by Christina Mackie, is the artist’s first museum exhibition in the United States.

Central to the exhibition is color: the production and consumption of color, and the association of color and action. Mackie uses color to visualize intention, as both conceptual tool and ancient human device.

Her practice is empirical, reliant on observation but prompted by personal reflection and a curiosity for the natural world. Here, found and natural objects are arranged alongside large-scale sculptures and glass and ceramic works made specifically for the exhibition.

In the exhibition essay, co-curators Solveig Øvstebø and Hamza Walker write about Mackie’s work, “Hers is a relatively humble practice, one whose range of media is responsive to the waxing and waning of the artist’s thoughts, moods, perceptions, and concerns, all of which are subject to the time and place Mackie may find herself. Inspiration can be drawn from near or far, from the natural world or the built environment, from the recesses of memory or the matter literally at hand.”