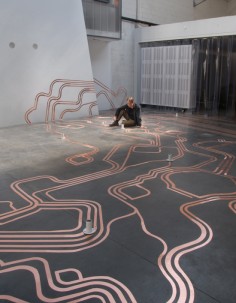 A silent labyrinth created out of open copper trails on the floor carries the electrical signals of a multichannel sound repository. By putting wireless speaker- cylinders on them, the carried sound layers can become audible and the interpretation by the visitors gets possible. The “Offener Schaltkreis” reacts depending on the manner in which the speakers are used: If nothing is moved, the sounds stay calm and soft, but as soon as a single cylinder is placed elsewhere, the sounds of all speakers intensify simultaneously. This results in a dynamic relation between silence and noise, which is influenced by the visitors.
.
.
.
.
.
.
source: kopierertumblr

open circuit is a sound installation by christoph haag, martin rumori, franziska windisch and ludwig zeller. the team created the project while studying at the academy of media arts cologne. open circuit consists of a labyrinth of open copper trails that cover the floor and walls of the installation space. these trails carry the electrical signals of a multichannel sound repository which become audible when wireless speakers are placed on the copper. the sound emitted by the speakers alters depending on how they are moved.