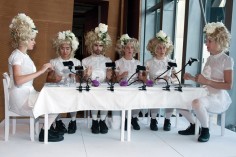 The Alices is an installation piece, yet at the same time it is an opera. Inspired by Lewis Carroll’s classical children’s tale Alice In Wonderland, it has been reimagined here as a living painting – what was once called a tableau vivant – which has at its center two works of art that both use and also comment upon the culture of high technology.

The second work is a piece of conceptual software created by designer Alon Zouartez. Zouartez’s Spinabook ware takes an original text and processes it by using a legal form of plagiarism, substituting words with their synonyms to create a legitimate but unethical clone.

In The Alices, I spun a short excerpt of Lewis Carroll’s original Alice in Wonderland, to create a text that slowly devolves as it is repetitively cloned. After six variations, the excerpt comes to mean its opposite – a succinct demonstration of the perversion of truth that occurs when things “go viral” on our public media.

Composer Edmund Campion, co-director of the Center for New Music and Technology at U.C. Berkeley, has composed a special score for the spun Alices. Campion performed his work on the Chicago Arts’ Club Steinway along with live vocalizations by Mikey McParlane, countertenor and contemporary performance artist, using custom feedback audio-software designed by Campion.

The music was conceived of as a score for a living “performance sculpture” featuring six cloned Alices consuming a fantastic illusory meal: the Nue Morte which has all been integrated into a cycling choreography. My Alices dance was inspired by “Miss Manners” style instructional videos that I found on line, here transformed into a mechanical series of robotic movements. The Nue Morte is visible through the Nue Morte custom app, opened on all of the Alices’ smart phones, displayed as part of the mis-en-scene.

My work adapts the forms and software normally used to create 3d shooter games. It transposes discussions about digital technology and a critique of the media through a feminist lens. In the context of ideas about a technology that has replaced nature by threatening to eclipse and permanently alter it, I argue that contemporary ideas about technology are not a rupture but a reflection of very conventional ways of thinking.

Technological culture is still functionally an all-male engineering culture – what the historian of technology David Noble has identified as “a world without woman.” He describes the high-tech ethos as actually emerging from medieval Christian monasteries and describes it as still being driven by an unconscious millennial desire to recreate the world afresh, without women and outside of nature. I have experienced something similar on a personal level in the vocational schools where I taught 3D animation for eight years before coming to Chicago and the School of the Art Institute.

In the absence of women, the masculine culture of technology, colored by what Noble has connected to Christian Millennialism, defines the impulse behind much of technological development, from atomic weaponry and space exploration to cybernetics and robotics. This impulse is one of both annihilation and of purification. Equally religious values pervade the technological research of the military/entertainment complex and influences its visual manifestations, particularly in relation to the body. An example of this is the typically hyper-erotic femme fatale populating mass-culture representations.

By creating virtual images that are sensual but not pornographic within mechanized, clockwork depictions of the natural, I try to subvert earlier dichotomies of woman and nature pitted against a civilized, “scientific” and masculine world of technology. In my own way, I am staging a romantic rebellion against technocratic and bureaucratic culture.
.
.
.
.
.
.
.
source: eyebeamorg

Claudia Hart is represented by bitforms gallery, NY. She is a former IDMagazine as well as an Artforum editor and is an Associate Professor in the department of Film Video New Media and Animation at the School of theArt Institute of Chicago, where she developed a special program,“experimental 3D,” in which she developed new pedagogical structures for teaching computer animation in the context of the avant-garde and experimental film.