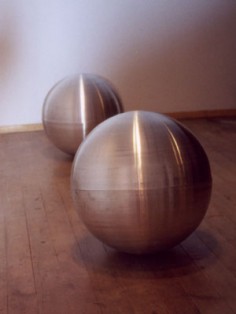 Constanza Silva is a new media artist who creates complex interactive environments where sound and robotic are the essential elements of a connected network. Silverfish Stream is her most recent artwork and, according to the author, ‘it is a sensual, poetic, exploration of the potential of human-machine interaction’. Two aluminum spheres equipped with sensors occupy the physical space of a gallery, ready to react to inputs. The presence of the viewer modifies their initial state of immobility and becomes the input for the movement that seems to be autonomous. The two spheres roll on the floor interacting together like in a pas de deux choreography, but with a certain level of unpredictability caused by their slight unevenness and ridges. The viewer seems to be excluded from the movement, while he is the source of energy and an active part of the scene. The sound generated by the friction of the metallic robots against the floor, like that created by the contact between man and machine, is registered, altered and played in real time by the spheres, each with its own tonality, and amplified in the room. What is generated is a stream of multisensory information (visual, auditive, tactile), natural environment for mechanic creatures. Being the robots non-anthropomorphic clarifies the aim of Silva that is focusing the direction towards which the technological innovation is oriented within the human-machine interaction that is not a reproduction of human beings relations but a new kind of interaction.
.
.
.
.
.
.
.
source: moliorca

Constanza Silva is a new media artist who creates complex, sound and robotic environments by setting minimal forms in motion within networked, interactive systems. Since 1995, she has integrated performance, video, sound, and electro-mechanical elements to explore embodied experience and agency within natural, technological and political ecologies. The environments she creates are dynamic fields in which the concrete and the incorporeal—metal forms, fleshy bodies, information and sensation—pass into and transform each other.

Silva holds an MFA from Concordia University, Montréal and a BFA from the Emily Carr Institute of Art and Design in Vancouver. Her works have been exhibited in Vancouver, Toronto and Montréal. Over the last decade she has participated in numerous projects, exhibitions and performances, some of which include: Iguana/Iguana Confirmed (2004) Techno experimentations in gallery, DARE-DARE, Montréal; Sin ruido, en memoria (2002), Transito, Marché Bonsecours, Montréal; and Flagrante Delicto (2001), Planet In Focus, the Toronto International Environmental Film and Video Festival. She has received awards from private foundations, the B.C. Arts Council, le Centre interuniversitaire des arts médiatiques, and the Canada Council for the Arts. Silva was born in Colombia and raised in Canada. She is currently working and residing in Montréal.