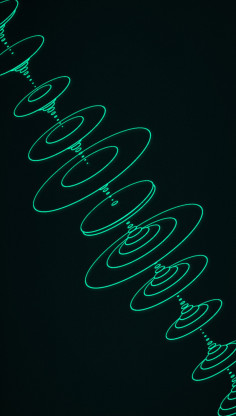 source: cyrillstuderch
I was approached by the band Carvel’ to create the music video for their new single «Baby Behold» which was released on May 5th, 2017. The song is a straight forward, electronic bundle of energy which captivates the listener through its simplicity and roughness as well as its catchy and carefully produced arrangements.

With that in mind I wanted to embed the song in a visual world where its qualities can emerge from. A simple, clear image with a reduced set of elements. The visual concept of the whole video is based on one single form. The ellipse. By showing it from different angles and in varying number of entities I achieved images which rather seem complex considering it originating from an ellipse. The inspiration for the vintage look of the visuals came from the aesthetics of computer graphics in their early days which I think match the rough and electronic sounds of the song pretty well.

The graphics were generated entirely by code written in Processing. After Effects was used to edit the image in post in order the achieve the vintage look of early computer graphics.
.
.
.
.
.
.
.
source: behancenet
I do graphic design, typography, film, visuals, projection mapping, light design and conceptual, inteactive projects. And music. And more.
I’ve studied at the Basel School of Design FHNW, Visual Communication Institute with Emphasis on New Media where I graduated in 2015.
.
.
.
.
.
.
.
source: cyrillstuderch
Hi, my name is Cyrill and I’m a visual designer from Basel, Switzerland.
I could also say ‹graphic designer›, but I guess that wouldn’t cover it. Don’t get me wrong, I love graphic design. But I see it as a foundation on which all my projects are built. I want to transform the quality of good graphic design into the medias of our time. Be it generative design, live visuals, projection mapping, film or interactive installations of any kind. Or good ol’ print media after all.
I studied at the FHNW Basel School of Design, Visual Communication Institute with Emphasis on new media where I graduated in 2015.