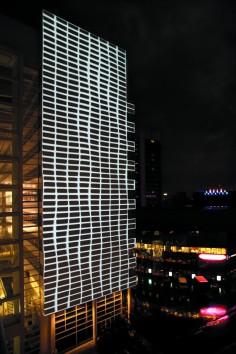 Work: Cellwise is a generative projection specifically designed for the city hall of The Hague. During the festival the city hall becomes the new habitat of a kind of ‘visual lifeform’. From the façade’s neatly arranged grid of white tiles, structures of a more entropic nature emerge. Shapes start growing, bursting, dripping, crawling and creeping. Cellwise is exploring the city hall’s sterile architecture, while at the same time challenging it to look for its visual counterpoints.
.
.
.
.
.
.
.
source: stichting

He collaborated with many artists and technicians working in the field, such as Daan Brinkmann, Electronic Opera, Thomas Köner and Lillevan/Rechenzentrum. At the same time he has been developing visual improvisations and related home-brew realtime animation software and hardware. He had solo performances on festivals like Dis- Patch, TodaysArt and Share.
.
.
.
.
.
.
.
source: vimeo

Daan Brinkmann (’83) is a media artist from the Netherlands. His main preoccupation is creating installation art. His installations are either autonomous or interactional.
His interactional works are always based on the expressive potential of the spectator’s body. Rather than the empirical elements within such a work being the artwork itself, they are often used as a means to achieve a new kind of social experience. His autonomous installations counterbalance this approach. They strive to be in-depth explorations where the perception of light, sound, space and time becomes subject to itself.