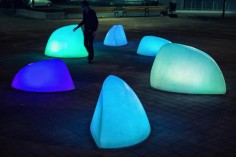 MARBLES are large glowing shapes which interact with people via sound, light and color.

Each MARBLE contains LEDs and smart sensors that instinctively respond to human touch, changing their mood from ‘bored’ to ‘excited’. MARBLES are also able to multiply these interactions between themselves, communicating with each other.

MARBLES transforms the landscape into an interactive meeting place of light.

In a world shifting between the analog and the digital, Studio Roosegaarde is the social design lab of artist Daan Roosegaarde with his team of designers and engineers.

Roosegaarde has been the focus of exhibitions at Tate Modern, National Museum in Tokyo, Victoria and Albert Museum and winner of numerous international innovation awards. Studio Roosegaarde also has a strong experience with public space commissions for the city of Rotterdam, Singapore, Eindhoven and Stockholm.

‘Marbles’, Stuido Roosegaarde’s latest creation, is an interactive installation consisted of large glowing forms which interact with people via sound, light and color. Each ‘Marble’ with embedded sensor and interactive technologies is responsive to human presence. It also communicates with each other and transforms the square into an interactive environment of light and play.