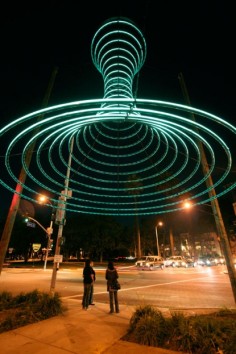 Empyrean Passage is reminiscent of both a theoretical black hole and portal into the celestial worlds. Empyrean (notice the pyre in the word) is the final and fiery level of heaven as depicted by Dante- or aether in Aristotle’s cosmology. The form is constructed like a giant hoopskirt and gracefully moves in the wind creating a gossamer lighting effect overhead. While this project is an oculus to the heavens, more focus is usually paid to more terrestrial stars in this neighborhood.

The interior of the spiral is designed with aqua and black dashes. The dashed interior creates optical effects with the eyes and at certain times of the day shifts your perception of the sky’s color.

My Artwork blurs the boundaries between Fine Art, Theatrical Design, Architecture, Landscape Architecture, Science and sometimes even Magic. My projects have ranged from complex rail stations and busy public intersections to quiet interpretive buildings, meditation chambers and galleries. With a Masters Degree in Art from the University of Washington and a BA in Theatrical Design from San Diego State University, my work is infused with drama, passion, layered meanings and often engages the public as co-creators within my environments.

I strive for my work to both conceptually and phenomenologically engage the viewer on various levels. The physical space the artwork inhabits is almost always part of the equation….an added voice to the project that provides additional history, layers and meaning. Whether that site is within nature, an urban environment or a highly refined gallery there is always added experience of the place.

Another part of the equation is the viewer/ participant. Originally trained in the theatre, I see the artwork not just about objects at a location, but as volumes of space to manipulate and about the relationships and choreography between the environment and the viewer/participant. It is also about the hierarchy of experience, what is seen and experienced in what order. How does time and the movement of people or the artwork vary the perception of the piece?

And then there is me; the artist, provocateur, scientist, and magician that loves to reveal or find that point of transformation of knowledge or perception. Each project tells a different story.

I perhaps am best known for working with light in its myriad of forms- creating environments that radically transform from day to night. But my work goes beyond seductive eye-candy, raising questions, probing the subconscious and engaging phenomenological experiences. The content, media and breadth of the work is wide, but I feel there is a solitary vision and rigorous conceptual underpinnings that unify the work.
.
.
.
.
.
.
.
source: dezeen

The sculpture consists of a spiral of electroluminescent lighting suspended over the pavement. Black dashes on the interior create an optical illusion, altering the viewer’s perception of the colour of the sky at certain times of the day.

Here’s some text about the project from Corson:
Empyrean Passage, West Hollywood CA

Empyrean Passage is reminiscent of both a theoretical black hole and portal into the celestial worlds. Empyrean (notice the pyre in the word) is the final and fiery level of heaven as depicted by Dante.

Theform is constructed like a giant hoop skirt and gracefully moves in thewind, creating a gossamer lighting effect overhead. While this project is an oculus to the heavens, more focus is usually paid to more terrestrial stars in this neighbourhood.

This project utilises extremely “green” electroluminescent lighting. The entire sculpture consumes less electricity than a household nightlight and operates on a photo cell.

Empyrean Passage was created as a “entrance gateway” to the City of West Hollywood leaving Beverly Hills.
.
.
.
.
.
.