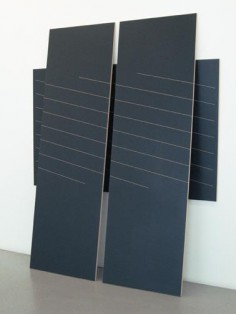 Daniel Lefcourt’s monochromatic works criticize and dismantle the processes of painting itself: its inspirations, its materials, and the spaces in which it occurs. Using source material such as photographs of the trash in his studio, Lefcourt creates indecipherable surfaces in low relief that hover between abstract and representational, as well as flat versus textured; The New Yorker has called the artist’s conceptual practice “a surrender to mystery.”
.
.
.
.
.
.
.
source: jamiesonfineart

Daniel Lefcourt was born in New York and lives and works in Brooklyn. He received his MFA from Columbia University and is a member of the faculty of the Rhode Island School of Design. Lefcourt has exhibited in museums and galleries worldwide, including solo exhibitions at Taxter & Spengemann in New York, Campoli Presti in Paris, Sutton Lane in London, and at White Flag Projects in St. Louis. His work has been included in numerous group exhibitions including First Among Equals at ICA Philadelphia; Knight’s Move at Sculpture Center in Long Island City, New York; Reel to Real: Photographs from the Traina Collection at the de Young Museum in San Francisco; and Greater New York at MoMA P.S.1 Contemporary Art Center, Long Island City, NY. His upcoming artists web project commissioned by Dia Art Foundation will launch in October 2013, and will be available as a working preview at diaart.org/lefcourt from June 1-29, 2013.