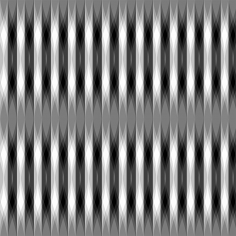 Each image begins as a series of black and white stripes. They are sonified — imported into an audio editor. Sound effects are added to individual color channels, as if they were sound, transforming the image. Because the tool is used in an unconventional way, there is no immediate way to monitor the effect. The image manipulator has a sense of what each effect does, but no precise control over the result. Although the process is very similar to Glitchometry, the look of the Stripes series is more heavily influenced by Op Art works, such as those of Bridget Riley and Victor Vasarely. By using simpler sound effects more sparingly (delay and flanger), the output is less noisy, and more crisply graphic.
.
.
.
.
.
.
.
source: rhizomeorg

Daniel Temkin creates work exploring miscommunication between people and the mistranslation between systems; the humor as well as the loneliness and isolation that come from the impossibility of being understood.

Daniel has an MFA from the International Center of Photography / Bard College, and has worked as a programmer for fifteen years. He has exhibited his work in galleries and festivals in the US and Europe and is currently an Artist in Residence at Harvestworks.
.
.
.
.
.
.
.
source: dumboartsfestival

Daniel Temkin (b. 1973, Boston) makes images, programming languages, and interactive pieces exploring our inherently broken patterns of thought, and the clash between human thinking and algorithmic logic. He has appeared on PBS’s Off Book series and presented at academic conferences such as GLI.TC/H, Media Art History (in 2011, Liverpool and 2013, Riga), the New Media Caucus, as well as hacker conferences such as Notacon and HOPE. His essays have been published in World Picture Journal, Media-N Journal, NOOART, and the GLI.TC/H Reader. His programming language Velato, which requires programmers to write music to control code, belongs to the runme.org software art collection, and his Dither Studies and Glitchometry are archived by Rhizome-at-the-New-Museum’s ArtBase. His work has been shown at Mass MoCA, American University Museum, and featured at galleries such as Transfer, Christopher Henry, Higher Pictures and Carroll/Fletcher.