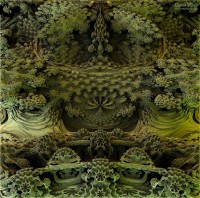 Recently, the now famous Mandelbrot Set was accurately rendered in 3D, and the results are astonishing. Discovered in 1980 by Benoit Mandelbrot, the fractal image has blown the minds of many given that the 2-dimensional design is in fact infinite. The underlying algorithm of the Mandelbrot allows for endless exploration of its intricate boundary – no matter how far you zoom in, rather than encountering simpler patterns, you instead find beauty in its increasing complexity.

The 3D Mandelbrot pattern, the ‘Mandelbulb,’ is unique and equally complex. Newly discovered algorithms by Daniel White and Paul Nylander gradually allowed the new form to take shape, and eventually the equivalent of an entire universe was found and rendered explorable. The fractal alien landscape is immense and is unlike anything ever seen before with caves, mountains, valleys, and never-ending repeating patterns resembling both microscopic objects and planetary surfaces.

The official site for the research is The Unravelling of the Real 3D Mandelbulb and many of the images below were created by either Daniel White or Paul Nylander. I’ve altered or cropped some images in order that they fit the thread better, however I’ve also linked to the larger variant of the original image.

Rather than being a simple 3D version of the 2D pattern (like below), White and Nylander were able to flesh out a final object that some might see resembling a bacterial spore or virus.

The Mandelbulb is a 3-Dimensional representation of the boundary only – it is the surface of the object that is infinite. You don’t explore it by entering it, you simply ‘poke’ around the complex folds that make up the outer barrier. The more you poke around, the more stuff you find. That being said, Daniel White’s rendering of the object allowed for penetration of the structure revealing cross-sections of the bulb allowing us to look inside as well.