That a Dead Man Sings 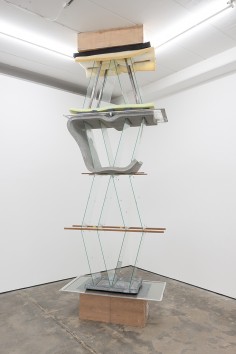 At first, “The Hairy Hand,” a show of recent sculptures by Brooklyn-based artist Dave Hardy, appeared to be a single, site-specific installation consisting of glass panels, foam and other materials strewn about and piled up on a gray floor. In some ways, it recalled one of Robert Morris’s “scatter” pieces from the late 1960s. There were, however, six discrete sculptures (all 2014) on view. These abstract assemblages, which also contain tape, aluminum and small found objects like pencils and pretzels inserted into nooks and crannies, are vaguely anthropomorphic and have intriguing titles, such as Destiny, Jane Fonda and Exes. The works were subtly unified by the dingy floor, which was the actual gray-painted linoleum of the artist’s studio, cut up into sections and refitted in the gallery. The workshop atmosphere emphasized the artist’s process, as if viewers had been invited to examine the sculptures in progress.

Over 6 feet tall and leaning against the gallery’s storefront window, Swan features a large slab of gray polyurethane foam wedged between two rectangular pieces of clear plate glass. One panel bears a frosted image of a swan (hence the work’s title), like one might find on a glass shower stall. The foam seemed ready to fall to the floor, and the entire construction looked precarious. Gallery attendants, however, explained that the foam had been soaked in cement and was securely in place. At times, Hardy’s use of foam here recalls John Chamberlain’s early foam-rubber sculptures. But while Hardy’s works appear light and pliable, they are, in fact, heavy and solid.

One of the most formidable works, Jane Fonda, commanded the center of the front gallery. A 6-foot-tall plate of thick glass stands upright, nested into a base that looks pillowlike but is made of cement-infused foam. Parallel to the glass, and similar in size and shape, a white diving board also juts from the base. Spanning the top of these two vertical elements, a long strip of white foam (again concrete-infused) serves as a kind of keystone. It bows in between the upright parts in a U shape and flops over them like long arms. In Hardy’s abstract sculptural language, the work suggests a rather comic presence.

Destiny is a large wall relief about 8 feet tall, 6 feet wide and 8 inches thick. A mass of curving and folded concrete-soaked foam strips in shades of gray, off-white and pink in the upper portion appear to rest rather perilously atop two small rectangular panels of glass, tinted blue-green and gray, respectively—although the piece is bolted to the wall. It could be read as a cartoonish character with a giant, stylized head in profile atop a blocky body on stubby legs. The tension and excitement in this sculpture, and in Hardy’s work in general, stems from the play of contradictory materials that corresponds to the evocative imagery. What might appear frothy and airy is actually dense and impenetrable, just as every abstract component seems to harbor a figurative gesture.
.
.
.
.
.
.
.
source: artspace

Creating sculptures out of materials such as sheets of glass, foam, metal, cement, and various found objects, Dave Hardy composes his sculptures’ seemingly precarious poise as an intentionally engineered defiance of gravity. Distinguished by a constant shuttle between literal and allegorical readings, Hardy’s artworks are both resolutely materialist and infused with a human scale and, more precisely, a human fragility that forces the viewer to confront them as bodies in space. They are, as Hardy has written, “abandoned monuments pushing up against each other . . . like bodies in an abject struggle with gravity and time.”

Hardy has had solo exhibitions at Regina Rex, Queens (2013) and Art in General (2009). His work has been included in group exhibitions at The Flag Art Foundation (2009), as well as at MoMA PS 1 and Sculpture Center, New York. In 2011 he was awarded a fellowship from the New York Foundation for the Arts.
.
.
.
.
.
.
.
source: davidhardydesign

Hi, I’m David Hardy. I was born and raised in Baltimore, MD, but have called Las Vegas my home for the past five years. My days are spent as a professor of graphic and web design at the College of Southern Nevada
I hold a Master of Fine Arts in Integrated Design from the University of Baltimore and a bachelor’s in graphic design from the University of Maryland Baltimore County.
With over fourteen years of professional experience, I have worked for ad agencies, educational institutions, private companies, nonprofit institutions, and artists & musicians.