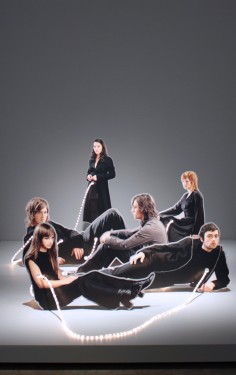 One of Australia’s finest artists, David Rosetzky creates intensely beautiful lens-based works exploring identity, subjectivity and relationships. Increasingly, he collaborates with professionals from the fields of theatre, dance, film and sound. Drawing on fifteen years of practice, True Self: David Rosetzky Selected Works presents early portrait and longer duration videos, photographs, photo-collages and sculptures that reveal intimate relationships between the various aspects of his practice. It includes a major new video work, Half Brother (2013), commissioned by CCP with support from Irene Sutton. The exhibition not only allows us to see the consistency of Rosetzky’s vision, but to engage with a trajectory in his video that moves from lo-fi, singular portraits through to cinematic, long-duration work.
.
.
.
.
.
.
.
source: suttongallery

David Rosetzky works predominantly in video and photographic formats, creating scenarios in which human behaviour, identity, subjectivity, contemporary culture and community come under intimate observation. He has been making portraits since the early 1990s, using the format to explore relationships between interiority and exteriority, reality and fantasy, authenticity and artificiality. Technically and aesthetically precise, Rosetzky’s work is stylised, moody and strikingly beautiful, and resembles the idealised images found in high-end advertising and screen culture.

‘Over the last decade … [Rosetzky] has quickly and quietly amassed one of the most coherent, nuanced and interpretatively resonant bodies of work in the country. Single-minded and singular in approach, the hallmark of his practice is an intensely self-aware contemporary emotional mannerism.’