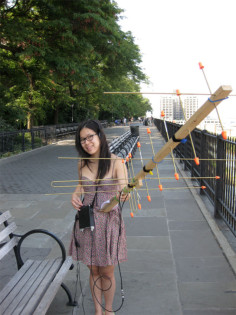 Hi Lifehackers! MAKE is best known for sharing all the goodness of making things for yourself, learning new skills and many times, voiding warranties… Marcus Chan of the San Francisco Chronicle said we’re the “The kind of magazine that would impress MacGyver” — and that’s what this week is about. It’s a little known fact, but MAKE even has the creator of MacGyver writing at MAKE: Lee D. Zlotoff! Lee is a writer/producer/director among whose numerous credits is creator of MacGyver (you can see his articles here).

So with all that being said, Lifehacker asked me to put together a list of my favorite MacGyver-like makers out there who inspire us all to hack, mod, and learn skills that can get us out of jams… and maybe sometimes cause a little trouble—the good kind.

Nerd and Fashion Designer
Diana Eng is a fashion designer who specializes in technology, math, and science. Her designs range from inflatable clothing to fashions inspired by the mechanical engineering of biomimetics. At 22, her inflatable dress (cocreated with Emily Albinski) made the cover of ID Magazine. In 2005, she was a designer on season 2 of the Emmy nominated hit TV show, Project Runway. She won Yahoo Hack Day in 2006 along with her two-team mates for designing and creating a blogging purse in less than 24 hours. She has worked as an assistant designer in research & development at Victoria’s Secret. She is the author of Fashion Geek: Clothes, Accessories, Tech. Her work has been featured in exhibits both in the U.S. and internationally around the globe, and has graced the pages of such publications as Women’s Wear Daily, Wired, and Craft Magazine. Diana is Make’s ham radio correspondent. Diana currently designs in the NYC fashion industry and is a founding member of Brooklyn based hacker group NYC Resistor.

Okay, so you’re thinking that maybe the hacker group thing is hacky and could be handy if you need to use a laser cutter, but how often will you need a LED dress in jam? There’s more! Diana recently posted that she’s joining the ARRL Public Relations Committee. What’s this? The ARRL is the national membership association for Amateur Radio operators. If you’ve heard of ham radio, this is it.

Ham radio is one of the oldest and most popular DIY hobby activities around the world. These folks were doing “free phone calls” and “Skype” before there was an internet. “Amateur Radio operators have shown an insatiable curiosity to explore and populate the high frontiers of the electromagnetic spectrum.” Not only that, but when disaster strikes, ham radio operators are usually called upon to provide and/or help emergency communications.

They’re not dependent on cell phone towers or overloaded systems in times of crisis; they’re distributed and long range. They help, they learn, and they share information. Diana is the type of person you need when you want to tap in to the space station to hear it go by or when you need to coordinate rescue plans when a hurricane drops in.

Anyone can become a Ham. It’s a fun hobby, it’s a great skill, and Diana’s other project “Fairytale Fashion” can even teach you about electronics. If you’re interested in ham, she’s created a ton of great videos over on MAKE, which I’ve embedded below, along with some other great resources. Grab a seat, and when you’re done—who knows—maybe you’ll be exploring the spectrum or helping out your community in the future!
.
.
.
.
.
.
.
source: dianaeng
Greetings from the world’s cutest research lab! We are dedicated to inventing new ways to make things pretty. From our laser distressed lace tees to our frost inspired scarves created with thermochromatic snowflakes that grow in cold temperatures, our designs are made special through touches of science and technology.

These special touches cannot be mass produced and are added by myself or artists in my design studio. Since they are experimental, we rigorously wear test and development designs to create products that you can have, hold, wear, and sometimes machine wash! I like to think of our designs as little pieces of experimental wearable art.

I keep my company small and close to heart. Most of our creations are designed and manufactured in New York City. We partner with manufacturers in the garment district and jewelry district then add finishing touches from our shared studio space in Soho, using fun in house toys: laser cutter, 3-D printer, large format digital printer, 4 color screen printer, pad printer, heat press, and industrial sewing machines. Finally our orders are filled shipped from Florida by my mom and her friends. From start to finish my designs are handled with love and care to create something special to wear.

Educated at RISD in apparel design, Diana Eng started her career as a designer on Bravo’s Project Runway, Season 2. Diana worked as an assistant designer at Generra but left the company to pursue a career working with more experimental fashion. She found her niche in Victoria’s Secret research and development department. The department created new innovation for mass market (including Beauty Secrets bust firming bra and Memory Fit).