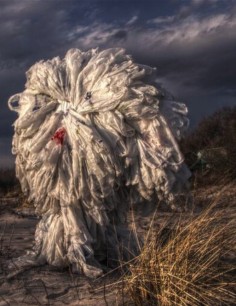 When we last left off, animator Tobias Stretch was spinning archetypal tales of loneliness, loss, love, and redemption using a swirling stop-motion technique that made it look like the world was being seen in first-person motion blur, kind of like watching life itself flow through an hourglass. His works define the term “labor of love,” the combination of deft attention to detail (Christopher Bono’s “Unity” music video was crafted from over 10,000 individual photographs) and a fundamental, time-honored appreciation for the animation medium itself.

Well, it’s been a year now, and Stretch has kept busy with projects big and small. Today, The Creators Project premieres “Ocean = Amazing,” Stretch’s new music video for Brooklyn-based band, Dirt Bikes. In three minutes, we follow a plastic bag man (played by Richard Lehmann, Braden Lawrence, and Frank Galaviz) as he traverses the beach in a visible ennui, navigating graffiti-covered barracks, kneeling down to a tidal pool to take a drink, and consuming (or being consumed by, depending on the way you look at it) more bags like the hundreds that compose his fluffy, matted body.

“Initial conversations between Toby and Richard [Lehmann of Dirt Bikes] sparked the idea of a character who is tormented by the intensity of the ocean, which echoes in the song’s battle cry ‘Always amazed by the sounds of the ocean,'” the band tells The Creators Project. Thus, the idea for the “misguided sea creature/bag monster who inhabits a surreal and beautiful world between winter and summer,” was born.

But the real story comes through the methods the notoriously spartan Stretch used to direct, shoot, and edit the video—all on his own. “I’ll never forget watching The Secret Adventures of Tom Thumb for the first time many years ago, that really left an impression on me and to think that they had to shoot on film with no way to preview what they had just shot is truly remarkable,” Stretch tells The Creators Project, referring to the “Pixilation” technique he used to create “Ocean = Amazing.” “All the shots were improvised on the fly in a day and a half. Shooting and moving frame by frame is always a tedious and exhausting race against the sunset, it can be stressful but exhilarating as hell once you start getting into a groove while working with a beautiful location, light and clouds. Lucky shoots really make all the struggle worth it.”

To “pixilate,” Stretch created his own sort of HDR by bracketing three exposures for each frame. Without the aid of on-site laptop playback he spun the dial on his 7D to give him a sense of how his images flowed together—a challenge Stretch shakes off, despite the still-thawing weather he faced shooting on Fort Tilden beach in Queens in late-March, early-April: “Over the years I’ve had to animate under a multitude of tough conditions which leaves you with a lot of funny and interesting stories,” Stretch explains. “At times I joke that there must be some way to channel the proper weather to achieve the best light or wind for an important shoot. Although that probably doesn’t work, I do feel like I’ve developed a knack for guessing the best days sometimes.”

Amid the pressures of logistics (“we drove around a bit exploring and worried we wouldn’t find an accessible more remote section of shoreline when we randomly came across a real interesting beach that had an old military beach bunker from WWII”) and colossal file sizes (“I calculated that for every frame of finished animation I was accumulating another 500mb of data”), the result is has what he calls a “spastic surreal feel” he feels pairs well with the rock ballad: “I was stumbling on beach debris as I moved around but I just went with it because I was aiming for a more twitchy, energetic look for this one anyway.”

“Despite the starving artist aspects of the trade,” Stretch concludes, “It’s still a fun time to be making things as an animator of puppets and people, it will be exciting to see where it all goes in the future.” With a talent like Tobias Stretch in our midst, we’ve got our eyes on the horizon line.