INTERNAL VIEW OF THE O’NEILL CYLINDER 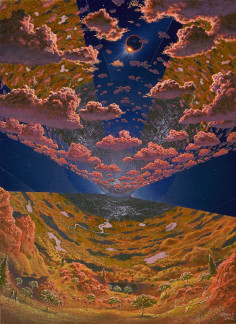 source:donaldedaviscom
These are some of my works commissioned by various NASA facilities. They are offered here to provide something like definitive digital versions of such images, and unfortunately the NASA centers can rarely do this. You paid for them and they’re yours.

My work on this page only was created in the public domain, elsewhere on my site I claim copyright on the artwork and text.

I would like to encourage people who enjoy this work to place the images on this page onto other sites for further distribution rather than linking directly to my site, so as to fairly distribute the bandwidth use. I have yet to temporarily pull this page due to bandwidth issues, but I came close February 07!
.
.
.
.
.
.
.
source:donaldedaviscom
One of my earliest Space Colony paintings was based on the giant ‘Model 3’ cylindrical habitats envisioned by Gerard O’Neill. I imagined the clouds forming at an ‘altitude’ around the rotation axis. At this time the scene is bathed in the ruddy light of all the sunrises and sunsets on Earth at that moment as the colony briefly enters the Earths shadow, out at the L5 Lagrangian point where stable locations are easily maintained. Oil on canvas panel disposition unknown.
.
.
.
.
.
.
.
.
source:universetodaycom
The International Space Station is big. About the size of American football field, it has an acre of solar panels, includes 358 cubic meters (12,626 cubic ft) of habitable volume, and there is enough reflective outer surface that in the right conditions, it can be seen from Earth during the day. But with the ISS, we’re just getting warmed up with building structures in space. There are some ideas out there for even larger structures — so called megastructures in space. Here are a few proposals for future space stations and structures that one day could be built in Earth orbit.

The top image is called an O’Neill cylinder, and is a space habitat proposed by physicist Gerard K. O’Neill. What started out as a design challenge for his students became structures O’Neill used in his book that promoted the idea of humans living in space, The High Frontier: Human Colonies in Space. An O’Neill cylinder consists of two very large, counter-rotating cylinders, each 5 miles (8 km) in diameter and 20 miles (32 km) long, that are connected at each end by a rod via a bearing system. The rotation provides artificial gravity on the inner surfaces while the central axis of the habitat would be a zero gravity region, where recreational facilities could be located.

To save the huge cost of rocketing the materials from Earth, this habitat could be built with materials launched from the moon with a mass driver.

After O’Neill proposed his structure, a later NASA/Ames study at Stanford University developed an alternate version, the Stanford torus. This is torus, or donut-shaped ring, 1.8 km in diameter. This structure would be capable of housing 10,000 to 140,000 permanent residents, similar to a suburb here on Earth.
The structure would rotate once per minute to provide between 0.9g and 1.0g of artificial gravity on the inside of the outer ring from centripetal acceleration. The interior of the torus would be used as living space, and is large enough that a “natural” environment can be simulated, including trees and other plants. Sunlight would be provided inside the structure with a system of mirrors.

A Bernal sphere is a another type of orbital space habitat intended as a long-term home for permanent residents. It was first proposed in 1929 by John Desmond Bernal, and is said to be one of the inspirations for Gerard O’Neill and his students. Bernal’s original proposal included a hollow spherical shell 1.6 km (1 mile) in diameter, filled with air for a target population of 20,000 to 30,000 people.

Bernal predicted that as the human race grew, their material and energy needs would outpace what planet Earth could provide. Orbiting colonies could harness the Sun’s energy and provide extra living space for a burgeoning population.

Rotating the sphere twice a minute would generate an artificial gravity aproximate to Earth’s. An advantage of the sphere is that it has the smallest surface area for a given internal volume, so minimizing the amount of radiation shielding required.

Our next Future Friday will take a look at megastructures at the planetary scale.