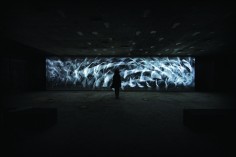 Work: MOONLAND 2013 Merged dual-channel digital film installation HD B&W – stereo sound 8’32” seamless loop Two HD projectors, Two synchronised HD media players and ultra-wide projection screen Edition of five plus two artist’s proofs We all live in MOONLAND. The gravitational pull of the Moon creates tides in the Earth’s oceans and distorts the Earth’s crust. It was instrumental in the evolutionary journey of life from the sea to the land. The reproductive cycles of many flora and fauna still follow the rhythms of the Moon. MOONLAND was made by artist / filmmaker Doug Foster and shown on a 13.5 metre wide screen at the BRUTAL exhibition staged by Lazarides and The Vinyl Factory at 180 The Strand, London in 2013.
Photographer: Ian Cox
.
.
.
.
.
.
.
source: dougfosternet
Doug started out as an animation cameraman at the BBC in 1982. He soon became a lighting cameraman, shooting TV title sequences and commercials for many of the top production companies in London. In 1993 he joined the renowned Blink Productions as a commercials director and garnered some of the advertising industry’s highest awards for his films.
Doug gave up the world of commercials in 2006 to devote all his energy to making art. His first works were a set of finely crafted film installations that explore the lengths that people will go to when faced with serious challenges.
His more recent, large-scale projection installations aspire to beguile at a more primal level by imposing perfect symmetry on irregular forms from nature to evoke pseudo-biological imagery. Doug has exhibited at The David Roberts Foundation (2007), Punchdrunk’s Tunnel 228 (2009), Lazarides’ Hell’s Half Acre, The Minotaur and Bedlam at The Old Vic Tunnels (2010 – 2012), Daydreaming With…St Michael’s (2011), Daydreaming With… The Hong Kong Edition (2012) and Secret Cinema’s Prometheus (2012). His solo shows include Only Human at The Fine Art Society (2008) and In the Naughty Chair at Lazarides (2011).

Symmetry is common in the designs of nature, but perfect bilateral symmetry is rare. EVE and her Tree of Knowlege display a sinister beauty born of unnatural perfection.