Be the Inside of the Vase
Part I: Million Dollar Baby
Part II: Break the Vase 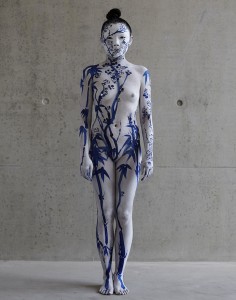 The performance ‘Be the Inside of the Vase’ was divided into two parts.
The first story began with my father’s attempt to commit suicide. The performance revealed my uneasy childhood and difficult relationship with my father. I was still and silent whilst my voice revealed the narrative using a pre-recorded audiotape. In the second performance the story moved towards my relationship with my mother. Through my rather brutal personal history I addressed sexually political statements such as: from my father: “Women should be like vase, smooth, decorative and empty inside! ” From my mother: “ Don’t be a vase, pretty but empty inside, be the inside, be the quality!” From myself: “This is my voice, my story, my childhood, I am not a vase! .”
.
.
.
.
.
.
.
source: cfileonlineorg

Drawing on her volatile personal history as a child growing up in China, Echo Morgan, whose real name Xie Rong, creates devastatingly emotional performance art. One piece titled Be the Inside of the Vase performed in 2012 at The Royal College of Art in London was based on a conflicting childhood memory. Her mother would tell her “Don’t be a vase, pretty but empty inside, be the inside, be the quality!” while her father would say, “Women should be like vase, smooth, decorative and empty inside!” Beginning with this memory, Morgan pulls the audience deep into her personal history and psyche.

Be the Inside of the Vase was divided into two parts and begins with the background of her difficult upbringing. Morgan explains, “The first story [Million Dollar Baby] began with my father’s attempt to commit suicide. He owed everyone money. The performance revealed my uneasy childhood and difficult relationship with my father.” In the performance, Morgan stood motionless, painted like a blue and white song dynasty vase, while a recording of her voice was projected into the room telling her heartbreaking story.

Million Dollar Baby begins with a description of her father, neglecting their family, falling into debt and attempting suicide, all a result of his pursuit of his beloved Song Dynasty vase collection. After Morgan’s mother and father divorced in 2011 he promised to make up for his poor fathering and sell his vase collection to pay for Morgan’s college education. He got a loan from her mother to send the vases to auction, where they were promptly confiscated for being stolen goods.

The story continues, revealing equally outrageous stories including her mother’s nearly fatal car accident and her parent’s marriage on what was expected to be her mother’s death bed. She also reveals her father’s dark fantastical life involving losing his virginity at age 13 to a 27-year-old, being a famous local gangster, street performer, stolen car salesmen, brothel owner, casino owner, cocktail bar owner, drunk driving killer and more. He had a life of radical ups and downs, financially and psychologically, which made Morgan’s childhood emotionally abusive, confusing, and at times, terrifying.

“In the second performance [Break the Vase] the story moved towards my relationship with my mother. Through my rather brutal personal history I addressed sexually political statements such as: from my father: “Women should be like vase, smooth, decorative and empty inside!” From my mother: “Don’t be a vase, pretty but empty inside, be the inside, be the quality!” From myself: “This is my voice, my story, my childhood, I am not a vase!”

Break the Vase is an interactive portion of the performance, which begins with Morgan standing inside of a vase form made of wood frames and a paper surface. Just her head is exposed, barely fitting through the opening and poking out the top. In front of her was a pile of colorful water balloons that the audience was asked to throw at her. What at first appeared to be a fun activity for the audience quickly became emotionally dark. In the documentation of the performance, you can watch the audience walk in with a smile, throw the balloons, strike the vase, and then react in various ways to the experience. They had been tricked into an act of abuse, as literal as it was symbolic.

“I often invite viewers to participate, drawing strength from the audiences’ emotional vulnerability, and feelings of uneasiness, to complete the performance as a whole,” Morgan explains in her artist statement. “Here, my emotions become entwined with the audiences,’ creating a symbiotic relationship based on control and power.”

As the 150 balloons struck the paper vase the audience undressed Morgan’s vulnerable nude body, exposed through the ripped paper surface. In the video, her narration describes the experience as “150 balloons hit me like raindrops,” but the video shows a more violent nature to the event with balloons often striking the vase with enough force to shift it or sometimes smacking her in the face and then breaking on the floor. This incongruence of the idealism in the narration versus the violent reality of the performance parallels the audience’s delusion of fun disguised as brutality.

The performance is intended to elicit deviance from the audience seen in the fun colored balloons she provides, the drinks in their hand (although probably provided by the venue), and her slow participant-induced undressing. This dark eroticism is present in Morgan’s relationship with her father, at one point even stating “I used to believe that one day…that one day, he would come back, that one day he would rape me.” The audience’s encouragement to undress her at their will is similar to Yoko Ono’s 1965 performance Cut Piece in which Ono placed a pair of scissors in front of her and asked the audience to come forward one-at-a-time to cut off pieces of her clothing. Near the end of the performance a man gets overzealous and begins to cut off large chunks, exposing her nearly-naked body and clearly making Ono unsettled. Both pieces bring the natural deviance within humans to the surface forcing them to address their typically interior feelings in a very public context.

Break the Vase begins as a piece about Morgan’s mother and her advice to be “like the inside,” but as the performance is executed it becomes clear that her father is an inescapable character in the narrative. The audience is a metaphor for his persistent abuse towards both Morgan and her mother, but Morgan herself, in the vase, may also be a symbol of him. Morgan’s head sticks out the top of the vase just enough to be struck by the onslaught of balloons, an event that appears to be a strange beheading ritual. From the perspective of the father being both the abuser and the abused, Morgan has cleverly placed him in a fantasy hell of self-inflicted torture.
.
.
.
.
.
.
.
source: echomorgan

Born in the communist China of the Economic Reforms, Echo Morgan (real name Xie Rong) studied at the Sichuan Fine Arts Institute High School before moving to London where she gained a BA in Graphic Design at Central Saint Martins and a MA in Fine Art at Royal College of Art. Since 2011, She has been collaborating with photographer Jamie Baker on photographic interventions within her performance work. She lives and works in London.

The role of translation, the passage between gesture, body and voice, the shift from Chinese into English and back again, the relationship between performance and prints this is the sense contained within my work. Always movement across surfaces, entering and exiting backwards and forwards therefore I cannot settle on any one point. I am in flux, restless: a pure relationship between motion and the void.

My name is Echo Morgan, My real Chinese name is Xie Rong. I grew up in ChengDu, the pandas’ home in South-West China. I moved to the UK when I was 19. In my work I take on the role of director, performer, narrator, and filmmaker. I am collecting and collaging encounters, voices, texts, and images from my cultural roots in China and my daily life in the UK. Through the mediums of performance and film I explore the intrinsic and complex relationship between violence, beauty, and vulnerability, re-examining how these antipodal constructs impact ideas of the ‘self’ and the body. There are three paths in my work: Narrative, Live performance and performance Photographs: My narrative is rooted with my family history. I explore my individual memory that is deeply embodied with China’s complex society – one that had undergone a series of philosophical, ideological and political transformations. They show as films, little books, short stories and audio pieces. In live performance I often transform the surface of my body into symbols: Chinese national flag, blue and white porcelain, gold fish, Chinese landscape painting, rice balls and jade. I manipulate contemporary meaning into tradition iconography. I often invite viewers to participate, drawing strength from the audiences’ emotional vulnerability, and feelings of uneasiness, to complete the performance as a whole. Here, my emotions become entwined with the audiences’, creating a symbiotic relationship based on control and power. All the fragments act as a mechanical reproduction circle based on my Buddism philosophy of Samsara.