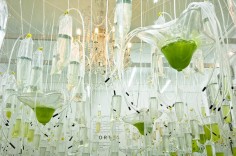 Claudia Pasquero and Marco Poletto co-founded ecoLogicStudio in 2004; the office’s work focuses on the development and application of a design method capable of exploiting the latest innovations in digital computational design. The work deploys digital technologies as a means of developing hyper-realities, regimes of intense exchange between the artificial and the natural, the designed and the accidental. Ecology is seen as a conceptual as well as a material paradigm; it is a generative force capable of re-describing current paradigms of inhabitation and manipulation of the environment; methodologically it thrives to develop a new design equation where technological progress equals an intensified symbiotic engagement with natural forces, processes and ecosystems.

Intermediate Unit 10 (Claudia’s and Marco’s unit at the Architectural Association) has used this as a brief to explore architecture as the art of managing material processes unfolding in space and time, and to seek to channel the creative forces latent in this to re-describe common design paradigms. The direct and continuous feedback between the office’s work and the academic research is a fundamental force in the development of ecoLogicStudio’s potential for innovation.

The innovative nature of ecoLogic’s work has allowed the office to practice internationally and to cooperate within a multidisciplinary network of highly regarded teams. Our clients include a variety of actors from art critics and curators, to academic institutions, to the private and public sector, both in the construction industry and the design realm.

Marco Poletto
Bio_ graduated with honours from Turin Polytechnic in 1999. Studied at the AA master course in environment and energy, and worked at Battle McCarthy as environmental designer. In 2002 he directed a research group on a six months project in Caracas, working on the subject of urban ecology in the informal city. Marco has been design tutor of the MA on sustainable design at the UEL London and is currently Unit Master of Inter10 at the Architectural Association School of Architecture London and Unit Tutor of Diploma8 at the London Metropolitan University; he co-directed the Fibrous Structures Workshop (AA/ITU exchange workshop). His recent publications include articles for the books “Space Craft: developments in architectural computing” – RIBA Publishing, and “Environmental tectonics” – AA Publishing as well as for various international magazines including “World Architecture – China” and the “AArchitecture – London”.

WHAT WE ARE DOING
We are an architecture studio combining a new form of digital craftsmanship with the development of strategic and critical concepts of urban self-sufficiency. We design and engineer responsive architectural and urban prototypes, living artificial assemblages deployed to test future practices of ecologic development. We combine virtual and physical environments to radicalize our contemporary experience of nature and prefigure new typologies of urban landscapes. Within these spatial and experiential frameworks the urban energy, waste, water and food cycles are re-engineered as synthetic hybrids of matter and digital information.

“HORTUS” IN 100 WORDS
HORTUS (Hydro Organisms Responsive To Urban Stimuli) radicalizes the notion of urban self-sufficiency through a new cyber-garden prototype, an hanging cloud of bio-pixels designed to stimulate the emergence of novel urban farming practices. Each pixel hosts forgotten algal micro-organisms rescued from local canals and breeds them within an artificial substratum fitted with ambient sensing technologies and virtual interface. Visitors blow CO2 inside the bio-pixel, adjust the nutrients content and, as a result, release oxygen. With smart phones they access its data feeds to nurture the virtual garden, each tweet a new particle in the emergent cyber-gardening cloud.