My Gallerist Made Me Do It 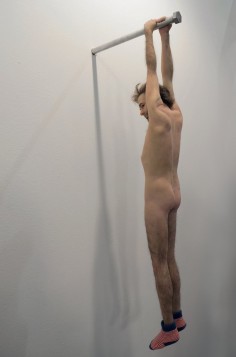 Ed Young is the bad boy of SA art, the agent provocateur, the iconoclast, the master of subversion. His instincts are to epater la bourgeoisie, defy political correctness and flout cant, shibboleths and taboos, thus exposing the conservatism of art lovers of every age and generation. The cult of his own personality and fabrication of a personal mythology involves lengthy bouts of narcissistic exhibitionism and self-exposure. His public persona is that of the rake, the roué, the dishy specimen of eye candy. This media image relies upon gossip and rumour – the chain-smoking, the epic drinking sessions, and consumption of somewhat more suspect substances whilst whiling away the night in smoky bars, like the saloon of the Kimberley hotel, his home from home. His notorious text-works like Wet Pussy and Black Pussy reek of the unreconstructed male chauvinist pig.

Ed is famed for doing nothing. However legend and reality do not coincide. The artist is an obsessive-compulsive workaholic who avails of every medium, begetting sculptures, performances, videos, slogans, neon, and battery-operated bar stools. He is also – though he will hate me for writing this – modest, self-deprecating, well spoken, beautifully-mannered and much easier on the eye than some of his works. The female sexual scalp-hunters are as hot in their pursuit of him as the collectors and gallerists.

Ne Travaillez Jamais consists of a photograph of the artist posing as a derelict street person. Money lying at his feet unashamedly solicits the charity of the viewer. The origin of the slogan was a vanished graffiti scrawled on a wall in the Rue De Seine, Paris, in 1968 by Guy Louis Debord, a Marxist theorist. The T-shirt is a work of art in its own right – conceived by Rivkrit Tiravanija, part of a coterie of 90’s artists like Catalan, Gabriel Orozco, Pierre Huyghe and Philippe Parreno who speculated what forms creativity could take after post-modernism, and spent more time in bibulous discussion than art-making. With Warhol the artist became far more central than his canon, for it was then that the craven worship of celebrity snowballed.

Ne Travaillez Jamais raises all these issues, and represents Ed as the failed artist he believes himself to be. His hobo reduced to mendicancy is a metaphor for creative burn-out and terminal disenchantment. Ed attributes this demoralized state to his misplaced faith in bankrupt ideologies such as avant-gardism, capitalism, communism, consumerism and globalization. The work is a cri de coeur, a confessional outpouring steeped in irony and contradiction. The jeans he wears in the photograph cost R3, 000 and the T-shirt almost double. Another paradox is that the work is for sale, and thus supports the very ideology it ostensibly challenges. Ne Travaillez Jamais undermines the worship of art and the artist, the credibility of the art fair, the integrity of the participating galleries and the ballyhoo of the art world’s publicity and public relations machinery. It pours scorn on the credulity of the viewer who is so frequently bamboozled by emperors with no clothes. And finally, like all Ed’s works, it resoundingly proclaims Eff off! Leave me alone! Let me be!
.
.
.
.
.
.
.
source: artthrobcoza

Ed Young burst onto the scene in 2002 when his work Bruce Gordon, curated by Andrew Lamprecht, hit the media headlines. Bruce Gordon, Jo’burg bar owner and local art world personality, was auctioned at a fund-raising event held by Michaelis as Bruce Gordon (Found Object [concept]). He was bought by Suzy Bell for R52 000 and subsequently donated to the South African National Gallery. Of course, the concept of human-as-art coupled with the large amount of money exchanged was challenging and garnered a host of media attention. This work pretty much stands as the epitomé of Young’s practice.

Ed Young can normally be found drinking at Jo’burg Bar in Cape Town till the early hours. One of his works from his undergraduate days at Michaelis can be seen on the wall. It comes from the time when Young worked in a studio and made art that could be hung on walls. Young may argue that a bar is a better place than a studio to entertain ideas of celebrity. Young has developed a persona as a marketing strategy, not in the corporate-financial-gain sense, but as a tool both to create art, and gain awareness for that art. It would be useful to note that even with all the media attention Young rarely sells work (with the notable exception of Bruce Gordon which was, strictly speaking, a donation).

Young’s persona leads into his major themes of boredom, insolence and laziness, which he mixes with the forms of conceptualism, performance and minimalism. It’s a contradictory, derisive, humorous cocktail and it is critical of and challenging to the South African art world. But, Young’s works do more than just vacuous questioning. He works with the idea that the structure of the art world has superseded the art object itself. The art object is no longer necessary, and there is a far more interesting residue to play with. Young has teased out these ideas in a series of one-night exhibitions (where the only tangible objects were the catalogues written by theorist and sometime partner-in-crime Andrew Lamprecht), videos, performances and some sloppily-written one-liners printed on good paper. If we manage to get our heads around the fact that so little real work has attained for the artist such a wealth of media attention and international shows, while other artists google themselves every day in the hope of finding a mention, then maybe we can appreciate the seriousness of his project.