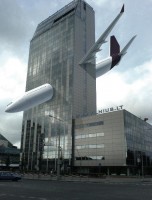 Egle Rakauskaite is a leading Lithuanian artist, recognised for her unique and individual works which combine qualities of purity, intimacy and emotional depth. She was born in 1967 and graduated from the Vilnius Academy of Arts in 1993. Trained as a painter, she initially rejected the medium, drawn to unconventional, perishable materials such as chocolate, hair and strawberries. Her work has since moved into performance and video, with a documentary strand. She was selected to represent Lithuania at the 48th Venice Biennale in 1999. She has been awarded important international bursaries including ArtsLink fellowships in the USA in 1998 and 2000 and a residency at Akademie Schloss Solitude in Stuttgart in 1998.
Egle Rakauskaite is a leading Lithuanian artist, prominent on the world scene for her highly individual and memorable works. Born in 1967, she studied painting at Vilnius Academy of Arts and graduated in 1993. Described by critic Lolita Jablonskiene as “a unique artist, who does not follow any current trends of Lithuanian art”, Rakauskaite works in various media (video, performance, photography, making objects), free to associate and assemble them in different configurations as the project demands.

In the early years of her career, she made objects out of unconventional and perishable materials such as chocolate, jasmine flowers, human hair, honey and fat. As she states, “these materials were used to protest against paint and canvas. Many critics attributed this interest in unconventional materials and also some of the images I constructed to my interest in feminist art. However, I think that at present the differences between male and female creation are not that visible any more. It is important that the art work opens itself to the consciousness and sub-consciousness of the viewer”.

Critic Lolita Jablonskiene characterises Rakauskaite´s work as “conceptually pure and clean” while also “emotionally very impressive”. She sees this paradox as emerging from the use of “non-traditional” materials which “provoke some unusual, puzzling sensations”. And yet, the works evoke a private human experience, a sense of intimacy.

Rakauskaite views her art works as sentences spoken within the language of contemporary life. In a desire to communicate contemporary life she has moved into video and photography and engaged with contemporary society. During an ArtsLink residency at Out-North in Anchorage, Alaska in 2001, she interviewed elderly people on their lives and how they might have been lived differently. Again, in Germany, Russia and Lithuania she interviewed elderly inhabitants on the same question. The work was presented as a video installation “Another Breathing” in 2002 at Mare Balticum in Denmark. The participants´ answers are a series of striking statements strongly linked with national self-perception.

Egle Rakauskaite has initiated projects which have matured as they are presented and re-presented in different locations. Her live sculpture “Trap, expulsion from Paradise” was created in 1996 and figures a dozen young girls dressed in white confirmation dresses with their long hair braided into a tight net that binds them together in a circle. The title alludes to the expulsion from the enforced “Paradise” of a common fate under the Soviet regime. This work has brought the artist her greatest success and has been revived several times (in Vilnius, Warsaw, Istanbul and Zagreb). Critic and curator Lolita Jablonskiene describes how the work “opened the deepest subtle poetry of virginity, once shining with modesty and nobility, sometimes glistening with beauty and arrogance or pulsating with philosophical nuances.”

Egle Rakauskaite was selected to represent Lithuania at the 48th International Venice Biennale in 1999. She has participated in many other significant international exhibitions and her work is widely exhibited in Europe. Major shows include the Baltic Art Centre´s “Presence Balte: The Human Project” in Visby, Sweden, Athens and Barcelona and the “Baltic Security” exhibition at Arlanda Airport in Stockholm. Forthcoming exhibitions in 2003 include solo exhibitions at the National Centre for Contemporary Arts in Moscow and the Contemporary Art Centre in Vilnius and group exhibitions at Frankfurter Kunstverein (“Nation”) and the National Museum Szcecin in Poland (“Extra Strong Super Light”).

Rakauskaite has been selected for high level international artists´ residencies: Civitella Ranieri Centre in Italy, Akademie Schloss Solitude in Germany, ArtsLink residencies in the USA at the Fabric Workshop and Museum in Philadelphia and Out-North in Alaska. She was shortlisted for the Visiting Arts/Spike Island International Fellowship 2002 on the nomination of Lolita Jablonskiene, curator and art critic.

In 2002, she was a delegate to the European Cultural Parliament, a forum of artists and critics, which met in Bruges to debate issues of identity, diversity and politics.