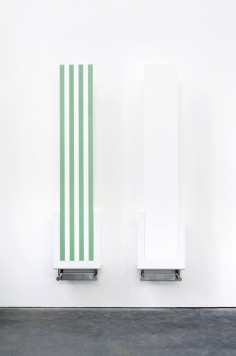 source:perrotincom
Elmgreen & Dragset have been working together since 1995 at the crossroads of art and architecture, performance and installation. Preoccupied with objects and their settings, and the discourse that can arise when those objects are radically recontextualized, Elmgreen & Dragset push against the normal modes for the display of art. Whether presenting sculptures or total environments, their work draws attention to the institutions that host them and their attendant politics. Performativity and participation are fraught in the work of Elmgreen & Dragset as their work invites and denies participation in equal measure (pools are emptied, diving boards are oriented vertically, bars are inaccessible, sinks dysfunctional). Quotidian objects are stripped of their utility and regarded as sculptural phenomena, taking on Minimalist aesthetics that challenge the sterilizing force of the white cube. In the same way, Elmgreen & Dragset’s outdoor public sculpture recontextualize the surroundings in which they are located, such as well-known projects like Van Gogh’s Ear at Rockefeller Plaza in New York or Prada Marfa along Highway 90 in the middle of the Texan desert.
.
.
.
.
.
.
.
source:artsynet
In their sculptures, installations, and performances, Elmgreen & Dragset redefine how art is presented and experienced. Their work borrows elements from social critique, performance, and architecture, as in Prada Marfa (2005), a Prada boutique sited in the Texas desert, or the one-act play Drama Queens (2007), in which remote-controlled replicas of iconic sculptures, including a Jeff Koons Rabbit, are voiced by actors including Kevin Spacey. For the 2009 Venice Biennale, they presented The Collectors, imagined living spaces of an art-collecting family and neighbor, wherein works by artists like Maurizio Cattelan and Tom of Finland were displayed alongside high-end design.
.
.
.
.
.
.
.
source:biennialfoundationorg
Based in London and Berlin, Michael Elmgreen and Ingar Dragset have worked as a collaborative duo since the mid-1990’s. Well-known for siting a Prada boutique in a Texan desert in 2005, the artists have been commissioned to create a number of sculptures internationally within the public realm: in 2016, their large-scale work Van Gogh’s Ear, which takes the form of a displaced swimming pool sitting upright, transformed the Fifth Avenue entrance to the Channel Gardens at the Rockefeller Center, New York; A Greater Perspective, an oversized and non-functional bronze telescope, was installed on New York’s High Line from 2015 to 2016, simultaneously drawing attention to and disrupting a secret view of the Statue of Liberty; HAN, a contemporary revisioning of the Danish national icon The Little Mermaid, was installed permanently at Kulturevaerftet Helsingør, Denmark in 2012; Powerless Structures, Fig. 101, the winning proposal for the Fourth Plinth Commission selected by the City of London, was on view in London’s Trafalgar Square from 2012 – 2013; and in 2012 the artists were commissioned by the Munich city council to create and curate a programme of installations across Munich’s main squares. The resulting a year-long artistic project, A Space Called Public / Hoffentlich Öffentlich, included the artists’ own work as well as the work of a number of other contemporary artists.