Giving It All That 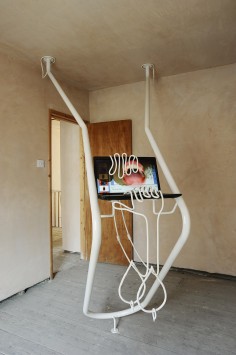 Emma Hart believes the overwhelming real we stumble through is split from the way digital culture references it, then smoothes it all over. Life looks good in images, or if not good, far away enough for us to manage and control. Sculpture, most recently ceramics, provides a way to physically corrupt and ‘dirty’ images and forcefully squeeze more life out of them. Clay provides a way to work behind pictures, and reveal the raw, crude, real state of things that images screen off. Hart wants to tell you how it really is and how it really feels. Clay + video are Hart’s plan to get the insides onto the outsides. Hart sets out to scale up ceramics, to offer not objects but situations, where outward appearances are eaten away by inner doubts.
Emma Hart lives and works in London. Recent solo exhibitions include: Sticky, Austrian Cultural Forum, London (2015); Spread, Art Exchange (2015); Giving It All That, Folkestone Triennial (2014); Dirty Looks, Camden Arts Centre (2013); M20 Death Drives, Whitstable Biennale, Whitstable (2012); TO DO, Matt’s Gallery, London; Word Processor, Stanley Picker Gallery, London (2012). Recent group exhibitions include: SUCKERZ, L’etrangere, London (2015) a joint show with Jonathan Baldock; Only the Lonely, La Galerie CAC Noisy Le Sec, France (2015); Dear Luxembourg, Nosbaum Reding, Luxembourg (2015); Hey I’m Mr.Poetic, Wysing Arts Centre (2014); Bloody English, OHWOW Gallery, Los Angeles (2013); The World Turned Upside Down, Mead Gallery, Coventry (2013). Hart was shortlisted for The Jarman Awards 2013, and awarded a Random Acts commission. In 2012 she was shortlisted for the Jerwood / Film and Video Umbrella Awards: Tomorrow Never Knows, with an exhibition at Jerwood Space, London. Hart was resident at Camden Arts Centre with her Question Department in 2009 and for The Forest residency at Wysing Arts Centre in 2012. She received an MA in Fine Art from the Slade in 2004 and completed her PhD in Fine Art at Kingston University in 2013. Hart is a lecturer on BA Fine Art at Central Saint Martins.
.
.
.
.
.
.
.
source: frieze

Emma Hart’s sculptural and moving-image works beckon, cajole and rebuff. For her contribution to the 2014 Folkestone Triennial, the artist installed a suite of new works in a semi-derelict flat above an abandoned frame-maker’s shop in the eponymous depressed seaside town. The exhibition’s title, ‘Giving It All That’, is a stock British phrase that refers to posturing or unwanted verbiage. It reflects Hart’s sense of social awkwardness regarding her own south-London accent – with its sliding, soft consonants and drawn-out vowels – as it rubs up against the London’s art world’s typically clipped middle-class English. Hart often dramatizes this anxiety-fuelled loquaciousness by sampling her own voice as a soundtrack to works that sweat or cry or shout.

‘Giving It All That’ comprised a group of quasi-anthropomorphic sculptures and video works. In an undecorated living room with raw-plaster walls, a troupe of bright orange-painted ceramic arms (‘The Pits’, 2014) emerged from the floor, bearing trays of wine glasses made from white clay rods. At the base of each waiter-like limb was a damp-looking patch of varnish, like sweat from an armpit, the physical evidence of exertion. Another structure (part of the series ‘Mates’, 2014) featured metal handrails that surrounded the viewer as he or she approached a laptop, held apart by two groping metallic hands. On screen, a video montage of pink-lipped mouths repeated, in rapid succession, the words ‘you’, ‘feel’, ‘great’ and ‘here’. For Hart, the sculpture resembles a hyper-sexualized woman, metallic legs corralling the viewer towards what she considers ‘the vaginal screen’. In another room, a series of salmon-pink arms and hands (‘The Private Eyes’, 2014) emerged from the walls brandishing clipboards and pens, as if scoring the visitors’ performances. On the flipside of the clipboards, facing the wall, were photographs that could only partly be seen, reflected in the tear-shaped mirrors hanging above them: an arrangement designed to frustrate access to a complete image.

If Hart’s work addresses awkwardness, class and social hierarchies, her thinking is also underpinned by critical ideas about screen media and photography. In particular, she has long been concerned with disrupting the authority of the photograph as a record, or index, of reality – a concept elaborated, in diverse ways, by thinkers from Roland Barthes to André Bazin. While she has a phd in screen media, Hart manifests her academic interests in her art through disjunctive forms of presentation and narration rooted in personal experience. In M20 Death Drives (2012), the artist retells the story of a near-fatal car accident on the M20 motorway that she endured some 20 years earlier. In the installation, clothes irons and empty soap-dispenser bottles act as unlikely stand-ins for cars and people, acknowledging their presence without the need for photographic record. Similarly, in Car Crash (2011), Hart interviewed various people in cafés and other locations about car crashes they had been involved in. If the interviewee spontaneously used objects (e.g. salt cellars, teaspoons or cigarette packets) to demonstrate the position of cars or bodies, she photographed the table-top arrangement, capturing an expansive index of trauma.

Hart’s critical distrust of screens and photography continues in her sculptural ensembles and, in particular, in her use of fired clay (she admits to having ‘fallen in love with ceramics’). The medium is a stark contrast to video: dirty, tactile and heavy, ancient and enduring; it is also somewhat more immediate to work with than video. Further, it embodies Hart’s concern with physical presence. Clay and pottery has, to be sure, made something of a return in contemporary art (see, for example, the work of Aaron Angell, Grayson Perry and Jesse Wine). However, rather than creating vessels in a decorative tradition, Hart forms the material into proximal body parts that act as metonyms for human action and employment. Ceramics first took centre stage in Hart’s major solo exhibition, ‘Dirty Looks’, at London’s Camden Arts Centre in 2013, in which she created an installation that related to her experience of working in a call centre: chipboard structures resembling filing cabinets towered precariously in the space, while distended red-and-pink ceramic tongues formed obscene furniture handles and morphed into unlikely objects such as trowels, shoehorns and napkin ties. Tongues – organs
essential to the call-centre industry – were transformed here into surreal elements of desire and abjection.

If Hart’s concern is to rip open the surfaces of photographs and screens to reveal the physicality, labour and emotional reality hidden beneath, her work also celebrates the possibility of fantasy and the duality of attraction and repulsion in art. Another disruptive technique employed in her installations is the use of loud soundtracks, often utilizing short loops of her own voice, which are both compulsive and abhorrent. In ‘Dirty Looks’, visitors were greeted by a recorded cacophony of ring tones, coughing and Hart’s stilted voice announcing: ‘You are being held in a queue. Please wait here in the number two position.’ In ‘Giving It All That’, soundtracks (from two of the ‘Mates’ video-sculptures) of Hart sobbing loudly, and another of her incessantly calling out ‘Oi, mate!’, seeped through the rooms in the flat, lending an air of suffering and confrontation. Above all, Hart’s work makes very clear that posturing and angst are merely different faces of the same human coin as reality and fantasy.