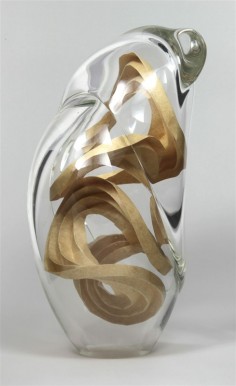 Erik Demaine and Martin Demaine are a father-son math-art team. Martin started the first private hot glass studio in Canada and has been called the father of Canadian glass. Since 2005, Martin Demaine has been an Artist-in-Residence at the Massachusetts Institute of Technology. Erik is also at the Massachusetts Institute of Technology, as a Professor in computer science. He received a MacArthur Fellowship in 2003. In these capacities, Erik and Martin work together in paper, glass, and other material. They use their exploration in sculpture to help visualize and understand unsolved problems in science, and their scientific abilities to inspire new art forms. Their artistic work includes curved origami sculptures in the permanent collections of the Museum of Modern Art (MoMA) in New York, and the Renwick Gallery in the Smithsonian. Their scientific work includes over sixty published joint papers, including several about combining mathematics and art. Recently they have been exploring folding hot glass, and computer aided design of glass cane.
.
.
.
.
.
.
.
source: erikdemaineorg

We have worked together for several years in both glass sculpture and paper sculpture, and have longed to create sculpture from both media in a way that they relate to one another—that they communicate. To start with, we as artists must communicate with the material. Paper relies on touch. The tactile interaction lets you talk to the paper, asking it to bend, and you can hear the material responding, as the folds form the shape.

Glass is hot, over 2000 degrees Fahrenheit, making it untouchable. Glass blowers rely on visual cues to communicate and shape this amorphous material. In order to make it relate to paper folding, we blow glass blindfold, leaving touch as the only way to communicate. Touch is possible through a thin layer of wet paper, which serves as the communication interface between the artist and the material. This experiment brought a new sensitivity and awareness in communication with the glass and between paper and glass. After the experience, we returned to making glass while sighted, and found that our perception changed and the physical sensation was heightened, while we continued to shape the hot glass through wet paper.

The communication between paper and glass continues through the curved-crease sculptures placed inside the glass forms. We use computers to design these sculptures, based on algorithms from the field of computational origami. Here we fold paper along concentric circular creases, a design originating at the Bauhaus in the late 1920s. Creases set the memory of the paper so that it tries to return to a specific dihedral angle, while uncreased paper tries to remain flat. Confined to open within a glass enclosure, the paper finds new equilibrium forms, which would not exist without the communication between the materials. We chose a head shape for the glass to hold the paper, as it embodies most forms of human communication: vision, voice, hearing, and smell.

As scientists we are concerned with how to best communicate new discoveries and processes. We use sculpture as a way to express our research to a broad audience, illustrating the beauty of mathematical structures through the design of physical manifestations. We find that the dialog between our scientific work and our artistic work inspires both our art and science in directions that would not be possible in isolation.
.
.
.
.
.
.
.
source: nsfgov