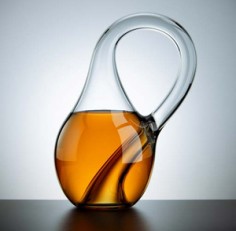 source: awesci
The Klein bottle is a non-orientable surface; informally, it is a surface in which notions of left and right cannot be consistently defined.

Simplifying things: A Möbius strip is a simpler example of a non-orientable object. That means it has no inside or outside. Add another aspect – having no boundaries – to it, it gets more complex and you end up with a Klein bottle.
If you haven’t heard of Möbius strips, to understand such surfaces, you can make one for yourself now.

Tear off a strip of paper.
Hold it horizontally, straight with both of the short edges in your hands.
Now, twist one of the edges by 180 degrees and join the two short edges. You’ll have something like this in your hands – [image]
Test the surface and edges: On this object you just created, move your finger along the surface. You’ll find that your finger comes back to the same place eventually. There is no inside or outside for this object, there is just one surface.
The same thing happens with its edge (try moving your finger along the edge). Here is a Music box playing a Harry Potter theme continuous – forward, inverted, forward and so on – manner; Relevant video:

Now spin it (the Möbius Strip) fast. You can NOT practically do it. I mean, spinning it like you spin a circle and get a sphere. There! You have a Klein bottle. It is better than a Möbius strip in a way that it (Klein Bottle) has no boundaries.

Klein bottles cannot actually exist in our three-dimensional worlds, the ones that look like them (Klein Bottles) are just 3D representations of a 4D object. Like a two-dimensional drawing of a 3D cube. These models are available for you to buy. Interestingly, in spite of having no inside or outside, they can be filled with a liquid. But, given the opposing force of air, they are pretty tough to fill. It is important to note that the 3D representation of a 4D Klein bottle has an intersection of material, this doesn’t happen in 4D. It is like the intersecting edges of a 3D cube in the 2D representation.
.
.
.
.
.
.
.
source: ohnofixittumblr
Klein bottles are inherently fascinating. An object that for all intents and purposes, that is utterly useless except in its ability to describe the failing of mathematics, and the human mind as a result.
My dad bought me one for my twentieth, and I honestly believe it is the most amazing thing in human comprehension… Or out of it.
Klein bottles are constructed out of one side of glass. I’ll let that sink in for a second: it only has one; a singular side. Even more perplexing is the inability for human language or mathematics to come up with descriptive tense for it: due to mathematics failing when presented with a Klein bottle, it has no theoretical volume. Despite this, it can hold volume, even though it has none of its own.
Even more confusing, is that it is technically a four dimensional object: an linear object that as you fill, defies physics and technically time itself. Being a single sided object, it is non orientable: imagine for example a piece of paper with only one side. if you look at the edge, Which side is the side faces left? Which faces right?
The answer? Neither exists.
In all intents and purposes Klein a purely intangible: whilst it is possible to own one, it does not exist. Being entirely unfathomable in depth and volume, it technically encompasses all things: at this moment in time you are both inside and outside of every Klein bottle in existence. A step further highlights human fallibility even more: it is a four dimensional object, that is bound in three dimensions, disregarding the fourth.
The thing I like about Klein bottles is their simple complexity: entirely unfathomable yet entirely simple: it is just a mass of glass shaped to become itself. But it has no mass at all, and whilst you may use three grams of glass to make it, once it reaches that shape, it has no mass at all. This is the limit of human understanding. This is where we lose our knowledge, this is where every single thing we, you, and I know, means nothing. And it’s just a simple glass bottle. So simple, and yet so exquisitely, impossibly, outrageously complex.
My Klein bottle both encompasses you, and you encompass it. But our minds cannot encompass anything.
Ladies and gentleman, I present to you the true manifestation of the end of human understanding, more complex than infinite black holes: the Klein bottle. The only form in the world that both exists, and doesn’t.
I made this post to highlight a point I couldn’t explain but wanted to. Everything we know, everything we experience is subject to our own failings, or successes as they may be.
True understanding of the world, is to accept that we understand nothing, even understanding itself.
.
.
.
.
.
.
.
source: tracerru
У бутылки Клейна нет краев. Изначально это была математическая модель, которую в 1882 году придумал немецкий математик Клейн. Ее внутренняя поверхность одновременно является внешней, и наоборот. Для изготоволения бутылки Клейна требуется стеклодув самой высокой квалификации, поэтому данный продукт никогда не был и не будет массовым.
.
.
.
.
.
.
.
source: gewuzhizhiweebly
在数学领域中，克莱因瓶（Klein Bottle）由德国数学家菲利克斯·克莱因提出。克莱因瓶的结构非常简单，一个瓶子底部有一个洞；现在延长瓶子的颈部，并且扭曲地进入瓶子内部，然后和底部的洞相连接。