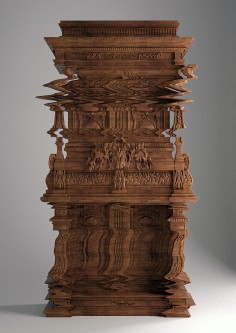 “In his second year working with Fratelli Boffi, Ferruccio Laviani has created yet another fanciful world from the depths of his prolific imagination. A concept that goes beyond individual products, it combines the expertise of a company that specializes in full-feature and tailor-made projects with the creativity of a designer who can strike a balance between the past and the future, blending the harmony and magniloquence of the classical with the charm and allure of the contemporary.

For the 2013 Furniture Exhibition, the renowned architect has created an entire universe divided into a home’s different spaces. Ferruccio Laviani enthusiastically focuses on the concrete design aspect of interior design, creating unique products that have a strong visual impact and a one-of-a-kind look, as well as coverings, panelling and flooring. This far-reaching vision blends and encompasses different sources of inspiration and questions the traditional tenets of design and furniture.

The fanciful blending of styles is paired with an innate sense of wittiness to produce furniture like the Good Vibrations storage unit. Selected for a preview of this new collection, the piece exemplifies this new design philosophy and the harmonious juxtaposition of the languages and cultures it is based upon.

Echoes of faraway places and Oriental elements are glimpsed in the “disorienting” design of this storage unit, which seems to have been “deformed” by a strong jolt or by swaying movements. Although it appears to depart from the aesthetics of the past, in fact it draws upon ancient knowledge in the use of carving and fine wood workmanship.

The appeal of this extraordinary piece of furniture lies in its ability to overturn and question classical stylistic principles such as purity, cleanness and symmetry, while evoking a comforting feeling of deja-vù and a sort of primitiveness, matched by unquestionable craftsmanship.”
.
.
.
.
.
.
.
source: laviani