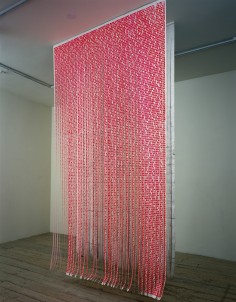 Much of Fiona Banner’s work explores the problems and possibilities of written language. Her early work took the form of ‘wordscapes’ or ‘still films’ – blow-by-blow accounts written in her own words of feature films, (whose subjects range from war to porn) or sequences of events. These pieces took the form of solid single blocks of text, often the same shape and size as a cinema screen. Banner’s current work encompasses sculpture, drawing and installation but text is still at the heart of her practice. She recently turned her attention to the idea of the classic, art-historical nude, observing a life model and transcribing the pose and form in a similar vein to her earlier transcription of films. Often using parts of military aircraft as the support for these descriptions, Banner juxtaposes the brutal and the sensual, performing an almost complete cycle of intimacy and alienation.