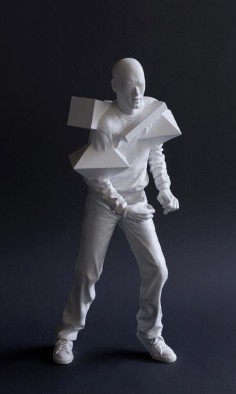 The central theme of artist Florian Hafele, born 1979, is the observation of the body, which reflects many questions about our social environment and its related phenomena. Hafele’s work translates into sculptures of deformed creatures, human as well as object, which develop a multi-interpretable essence through various contortions.
Embracing this aspect a variety of his works deal with performance in our social environment like the “Champion” which is a synonym for the over-strained human, in an achievement oriented society, or the exhausted tools which treat themselves to a break. “Champion” can be read as an euphoric tribute to the football/basketball artists or on the other hand as an over-bred high-performance athlete, who’s headless existence echoes the single dimension of his specific, trivial reality.
Hafele’s sculptural language usually focuses on one primary question; performance, which, when changing perspective, leads to a multitude of alternative views, interpretations and concluding questions. Consequently this enables the observer to continuously re-discover the sculpture, opening divergent ways of reading its context.
.
.
.
.
.
.
.
source: designboom

the sculptures of vienna and innsbruck-based artist florian hafele all feature a highly-contorted version of reality. hafele’s sensibility speaks to the notion of human performance within society and the resulting feeling of being over-strained or twisted in order to meet seemingly universal standards in addition to ‘saving face’. hafele’s pieces featuring a human figure never show the face of the by erasing the the humanity of the figures in eliminating facial expression combined with the placement of the figure’s limbs with added shapes, the single dimensional and desperate reality of the figure is highlighted.
hafele has created the ‘social panopticum’ sculptural series. the collection features three figures who possess geometric shapes growing from their faceless forms. the artist forms the deformed or contorted human bodies from pvc and paint, plastic, wood or bronze materials.
.
.
.
.
.
.
.
source: gool-artioua