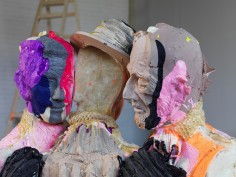 The works collectively titled The Immortals represent a concentrate of a number of Folkert de Jong’s themes. Invited by the Glasgow School of Art to exhibit in April 2012, he took as his starting point works by famed architect and designer Charles Rennie Mackintosh, originator of the School’s building. Influenced by the Arts & Crafts movement, Mackintosh’s creative world brought standardisation and a nostalgia for the artisanal together in an association of traditional techniques and the most advanced technology the late nineteenth century had to offer. De Jong shows the architect and his less celebrated artist wife Margaret MacDonald Mackintosh working in a simultaneously avant-garde and highly conservative Victorian setting. The title of the work is the Mackintoshes’ name for the group – also known as The Four – they formed with Herbert McNair and Margaret’s sister Frances. (…)

After the “christening” that was the initial installation, these pieces were subsequently shown in other venues in the same way as at the galerie dukan hourdequin in Paris, and thus developed a new life elsewhere: so little does their appearance seem to owe to the past that, at least at first glance, their historical content is no longer visible. Those elegant forms and aristocratic poses combined with flashy colors have made from the Dutch artist one of the most popular contemporary artists in the past decade with works spread all over the globe (from the Saatchi Gallery to Montréal’s Beaux-Arts museum).

Despite their initial “gore” movie impression, his works focus systematically on historical events or established art masterpieces, speculating about issues like power, reputation, exploitation, morality and the human being’s capacity for self-destruction. The history of sculpture is the history of commemoration, of the monument raised to mark a great battle or pay tribute to a king or a religious dignitary. This is why de Jong never treats his subjects gratuitously, and draws each work’s raison d’être from its context.
.
.
.
.
.
.
.
source: jamescohan

Dutch Artist Folkert de Jong is best known for his theatrical, narrative tableaux that address themes of war, greed and power. “When I watch the news or follow the world by the media,” de Jong stated in conversation with critic Steven Cox in 2013, “I can’t believe what I am hearing and seeing, it seems like a déjà vu, something is repeating itself.” A sense of tragedy and absurdity, a comically desperate psychological state, permeates his work, particularly through the sculptural material for which de Jong became known: industrial Styrofoam and Polyurethane insulation foams. Harsh and rough with heightened expressive power in material and theme, de Jong’s figures embody a grotesque horror and macabre humor reminiscent of the work of the 20th century European artists Georges Grosz and James Ensor.
.
.
.
.
.
.
.
source: saatchigallery

Folkert de Jong’s figurative installations combine a touch of ironic Old Master tableaux vivant-style composition with a strong dose of the macabre. His polyurethane foam mannequins have an arresting life-like quality, which makes their dirty and broken down facture all the more affecting. Frozen in permanent gestures like ventriloquist’s dummies (The Peckhamian Mimic, 2007), sometimes quasi-drunkenly gurning or grinning, as in Asalto de la Diligencia (2008) or expressionlessly looking on, these posturing figures have an eerie charge, like carnivalesque puppet grim reapers rising from the detritus of post-industrial culture, poignantly made out of a material that will not last.
.
.
.
.
.
.
.
source: mudam

At first glance, the three-dimensional pictures by the Dutch artist Folkert de Jong appear seductive and disturbing in equal measure. De Jong generally turns the exhibition space into a theatre stage, for which he designs sceneries made, with great virtuosity, from polyurethane foam, an unusual material in sculpture. Often inspired by historic facts, real persons or memorable episodes from art history, his works unfold in complex compositions that confront the viewer with extremely tangible directness.