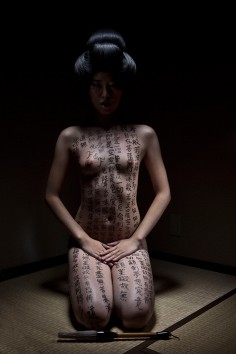 ln the “Japan Diaries”, our focus is on ambiguity and eroticism in Japanese culture, as weil as capturing moments of quiet unease and melancholy. lt was spellbinding to immerse ourselves in this extraordinary culture that has only been open to the rest of the world since the 1850’s. The many underlying tones and sub cultures made us feellike we were in a floating world of emotional. psychological. and physical potential, which we tried to capture in our pictures. We were inspired by Japanese cinema and photography, Akira Kurosawa, Araki and Daido Moriyamma, as weil as Edo woodblock prints and the erotic imagery of Ero Guro paintings.
BJ and Richeille Formento

“As outside observers, the Formentos’ stylized images explore the dichotomies that embody modern Japan- blurring the aesthetics between tradition and the ultra modern, fantasy and reality. The captivating tableaus exude a sense of tension, melancholy, and a quiet unease. Each image from Japan Diaries exists as if it were a still taken from a Japanese film noir, each solitary figure yearning for something unknown.” – David Fahey
.
.
.
.
.
.
.
source: ideafixa

This dynamic husband-wife team have made an art of their unique strain of photography. Exuding an eerie sensuality combined with a narrative cinematic sensibility, the ambiguous nature of the characters and scenarios remind us of David Lynch and Hopper-esque landscapes.
They couldn’t have landed in the photographic landscape at a more opportune moment. With the enormous interest in their work—success is eminent. Vogue Italia has been a forerunner and loyal supporter of their work, as well as cutting edge magazines like Aesthetica, Blink, Musee and L’oeil de la Photographie.
2012 was a breakthrough year for F+F. They were nominated top finalist to American Vogue’s New Exposure Competition working with Bottega Venetta and Red Digital Camera. In 2014 their works were selected by Alessia Glaviano, photo editor of Vogue Italia and L’Uomo Vogue for a “Glimpse at Photo Vogue” at Carla Sozzani Gallery and in 2015 for “45 Frames from Photo Vogue” at Leica Milan Gallery. Amazing response from the shows at Art Basel Miami Beach, Aipad and Armory NYC. Solo exhibitions across Europe starting in Paris, London, Berlin, Stuttgart and Dusseldorf. Their work also been exhibited in New York at Edelman Arts Gallery in February 2013. The most notable event this year is the publication of their first coffee table book by YK editions, as well as a film to promote the book which has been shown this fall at the Pompidou in Paris. Fahey Klein Gallery has offered them the coveted summer slot and the inaugural exhibition of Japan Diaries. A Photo Shanghai booth dedicated to their works Circumstance, September 2014. The inaugural exhibition of “She is Cuba” at Art Miami 2014 was received with great applause as well as the celebrity studded opening at Miami Fahey Klein and Chrome Hearts during Art Basel 2014.

BJ Formento was born in Hawaii and grew up in the Philippines, studied in San Francisco and moved to New York in 1999. Richeille Formento was born in London and attended the prestigious Central St. Martins College of Art before working as an art director and designer in the fashion industry.