Bottle with the Image of Its Own Making 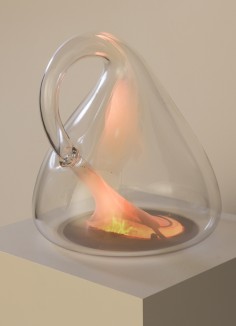 Gary Hill (b. 1951, Santa Monica, CA) has worked with a broad range of media – including sculpture, sound, video, installation and performance – since the early 1970’s, producing a large body of single-channel videos, mixed-media installations, and performance work. His longtime work with intermedia continues to explore an array of issues ranging from the physicality of language, synesthesia and perceptual conundrums to ontological space and viewer interactivity.

Exhibitions of his work have been presented at museums and institutions worldwide, including solo exhibitions at the Fondation Cartier pour l’art contemporain, Paris; San Francisco Museum of Modern Art; Centre Georges Pompidou, Paris; Guggenheim Museum SoHo, New York; Museum für Gegenwartskunst, Basel; Museu d’Art Contemporani, Barcelona; and Kunstmuseum Wolfsburg, among others. Commissioned projects include works for the Science Museum in London, the Seattle Central Public Library in Seattle and the new San Diego Public Library in San Diego. Special projects include an installation and performance work for the Coliseum and Temple of Venus and Rome in Italy (2005). Most recently the artist directed Beethoven’s Fidelio at the Lyon Opera House, Lyon and the Edinburgh Festival, Scotland (2013)

Gary Hill currently lives and works in Seattle, Washington. Widely considered to be one of the central figures of media art, Hill has been producing works since the 1960s’. He has had major international solo exhibitions at the Barcelona Museum of Contemporary Art, Centre Georges Pompidou, Paris; Stedelijk Museum, Amsterdam; Fondation Cartier pour l’Art Contemporain, Paris; Museum für Gegenwartskunst, Basel; Museum of Contemporary Art, Taipei and the Kunstmuseum in Wolfsburg among others. In the United States, Hill has had several survey exhibitions including the Guggenheim Museum, New York, San Francisco Museum of Modern Art, Hirshhorn Museum, Washington D.C. and most recently at the Henry Art Gallery in Seattle. His works are included in many permanent collections both in the United States and abroad. He has received commissions from the Seattle Central Library, Coliseum and Temple of Venus and Roma in Italy, the Science Museum in London and the new San Diego Public Library.

He was recently commissioned by the Lyon Opera House to direct Beethoven’s only opera Fidelio that premiered in March 2013 and was again featured at the Edinburgh Festival in August 2013.