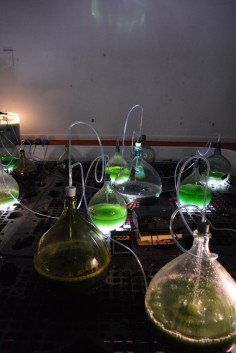 Gaspard and Sandra Bebie-Valerian aka Art-Act are two artists involved in the field of digital, electronic and media arts. Artists, theorists and curators, their work deals mainly with technology transformation, lowtech interfacing, but also the activation of societal, environmental and political issues. Working under the Art-Act entity, they question – often through interactive installations – the reappropriation of technologies for the benefit of critical thinking in our society. Also keen to produce exchange and contribute to the expansion of spaces for debate, they manage Oudeis structure dedicated to contemporary art and digital arts, located in the Languedoc-Roussillon.

For the Gamerz festival, Gaspard and Sandra Bebie-Valérian will present Viridis. Viridis is a global project that relies on different modules, the main being an online video game, immersive, plus an installation made of spirulina bioreactors and a set of videos and sounds. While Viridis is mainly available on the internet, the two artists, at this occasion, will present it out of the screen, they will deploy and spread it in several modules.
Viridis is a unique game experience combining adventure, survival, and an actual operating spirulina community management. Through the video game, the community can directly affect and interact with a real operating spirulina farm, managed by the artists.
The Viridis context is set in a post-apocalyptic world, in which survivors owe their survival to the “green counterpoison”, the spirulina. The player is a “child of the afterworld” whose mission is to build a new farm for a future colony. He must therefore go on exploration, recovery items and materials, assemble and reuse them to create the conditions for the production of spirulina. By participating in the game, the player accesses the community management of an actual spirulina farm. In the game, the players earn points they can invest in daily tasks or items, they can also vote in referendums as sort to decide the procedures for the good development of the spirulina.
Spirulina is known for its health and nutritional benefits and used in humanitarian contexts. The Viridis farm is located in the southern Cévennes. It currently consists of a greenhouse with a tank where spirulina is cultivated, it works with solar energy and is equipped with sensors to monitor the health and production.