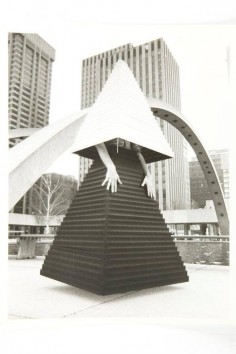 “General Idea is basically this: a framing device within which we inhabit the role of the artist as we see the living legend.” (Showcard 1-001, General Idea, 1975)

General Idea was founded in Toronto in 1969 by Felix Partz, Jorge Zontal and AA Bronson. The collective interrogated media image culture through now legendary projects like File magazine, as well as paintings, installations, sculptures, mail art, photographs, videos, ephemera, TV programs and even a beauty pageant. The group’s transgressive concepts and provocative imagery challenged social power structures and traditional modes of artistic creation in ever-shifting ways, until Partz and Zontal’s untimely deaths from AIDS-related causes in 1994. “Through a prolific creation, General Idea’s body of work reveals a complex combination of reality and fiction, and of parody and rigorous cultural critique,” says Bonnet. “Treating the image as a virus that infiltrates every aspect of the real world, the group set out to colonize it, modify it and so present an alternate version of reality. Their visionary influence has only become more apparent with the passage of time.”
.
.
.
.
.
.
.
source: slash-paris

Working together as General Idea beginning in 1968, the group served as a model for collaborative, artist-initiated activities. Employing strategies borrowed from contemporary media. General Idea utilized popular, readily recognized forms like corporate logos, mass distribution magazines and familiar events such as the ubiquitous beauty pageants. Their inhabiting these already built forms was viral, by intention, and their appropriation deliberate and done with impunity. AA Bronson described their collaborative method as being additive, geometric, with all three players working together on an idea. Out of this conceptual partnership came a remarkable production of published editions, exhibitions and installations—political, playful, ironic and astute. In Europe in the ’70s the strong theoretical, collective basis of their work was of particular interest, and a recognition of their analysis of mass media grew from that. Counter culture and popular culture met high art in a democratic mix that produced ideas and material that could be apprehended and broadly distributed. Participation was a key element, an example of which is reproduced here: the Orgasm Energy Chart, a mail art project which could be filled out, analyzed for trends and patterns and returned by post, to General Idea. In 1968 Michael Tims (AA Bronson), Ron Gabe (Felix Partz) and Slobodan Saia-Levy (Jorge Zontal) formed the conceptual art collective, General Idea. From 1969 to 1994 they worked collaboratively, “three heads, twelve limbs,” one creative entity, ending with the deaths in 1994 of Felix Partz and Jorge Zontal from aids related illnesses. Their work, including video, performance, installations, publications and edition-based projects has been shown internationally and, in retrospective exhibitions, continues to tour. General Idea’s archives are in the Library of the National Gallery of Canada. AA Bronson, GI’s surviving member, has continued with his own practice.
.
.
.
.
.
.
.
.
source: shdnsm