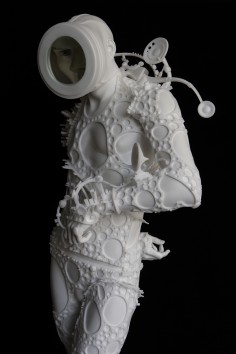 source: sabinbors
What’s going to happen when the tide overflows with our rejected products – abandoned on Earth and collected by the Sea – when the pollution touches so many species that life itself will become diminished? Impressed by everything that the Sea, in turn, rejects and transforms, on the beaches, Gilles Cenazandotti harvests the products derived from petroleum and its industry. The choice of animals that are part of the endangered species completes this process. In covering these animals with a new skin harvested from the banks of the Sea, it is the artist’s intention to draw attention to this possible metamorphosis – in Cenazandotti’s words, to create a trompe l’oeil of a modified reality.

The perspective of cloning and automation – two topics the artist appeals to in more of his works – ultimately leads to the reinvention of the wildlife and makes the artist imagine this derivative animal kingdom as the aftermath of excessive consumption. The diversity of forms and the jarring colours create a bestiary of robotic waste animals fighting the natural elements. But the sculptures reveal not only the dynamics of survival; they also show how animals may have changed territory and might be looking to find more resources to enhance their own species. As the species see their living space diminish, attached to nothing natural and stranded in unknown, unrecognizable places, they seem to embrace mutation.

Standing on his paws, The Polar Bear discovers the brave new world, but he is frozen in his own animal form. By photographing the sculptures in the natural environment, Cenazandotti makes the paradox evident: covered in plastic, these animal sculptures seem indestructible shells in their armor of waste, signaling the struggle the species lead to protect their own. The plastic beach thus opens as a place for reflection on the future of our planet and the evolution of life, the society of overconsumption, the challenge of nature and resources, and the destruction of species.

Parabolhomme is a reflection on the intrusive technologies such as artificial satellites and other parables that lay their claim against any preservation of the intimate and the individual. It is the parable of human evolution that Gilles Cenazandotti unveils here; an allegory, or maybe a fable of how the human fulfills its descending curve on the evolutionary ellipsis where we are about to transform into a different species. As the Homo sapiens slowly gives way to Cyber sapiens, a creature part digital and part biological integrating the digital and the molecular dimension as a step away from the merge of biology and technology, the human body is less and less the manifestation of a human or humanizing presence. Will the world be shared and divided between biological clones, technological humanoids, and the immaterial multiples of the virtual world? Will the new human encounter forms of life that slowly become self-aware and transgress their condition?

It is the body that faces the most radical challenges today. Imperfections and incompleteness become reasons enough for the body to turn into a matter of personal (post-)creation. Its fragility and limitations express the quest for a ‘posthumanity’ where the natural body is no longer the object of beauty and desire, but an autonomous surface for cyborgisation and virtualization. Free from its bodily condition, the posthuman is an enhanced form of life, in close connection with technological performance. Technology delivers humanity from its limitation by imitating the organic. The cultural construction of tangible bodies and ideal beauty makes way for the technological exceptionalism.

In Gilles Cenazandotti’s Parabolhomme, a hybrid body of digitised flesh and intrusive technology makes us wonder about the new post-biological era we are about to enter. Robotics imitating natural forms and patterns into infinitely more elaborated, complicated yet efficient structures, are the new figures of transgression and subversion, replacing the dominant representations in today’s society. Not a full cyborg yet, but ageless, genderless, and pure nevertheless, Cenazandotti’s human is an expression of our desire for an all-powerful technology that might bring the promise of immortality. Its face has lost the traits of individuality, intimacy and recognition; its gaze no longer scrutinizes the outlooks – it is a gaze through the porthole, captive and hermetically closed inside its form.
– These presentations have been originally published on anti-utopias contemporary art platform on March 12, 2014.