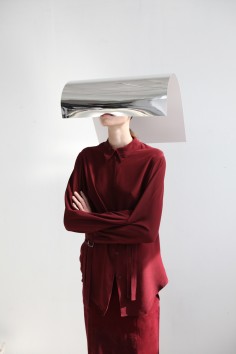 source: publicworksgallery
HART+LËSHKINA is an interdisciplinary image-making duo, composed of Tatiana Lëshkina and Erik Hart. Their work deals with the themes of vulnerability, disengagement, relationship between the individual and its surroundings, and a dislodging of everyday life through simple acts and absurdist theatricality.
.
.
.
.
.
.
.
source: vimeo
HART+LËSHKINA is an image making duo composed of Tatiana Leshkina and Erik Hart.
They create interdisciplinary visual works for various contexts.
Photography/ Moving Image/ Artistic Direction.
Based in NYC
.
.
.
.
.
.
.
source: thisishilt
Bold and beautifully captured spaces of being human and dealing with it’s surroundings. Fairly simple and dead serious with an irony of humour. Almost unrealisticly documental. Mixing different and simple states of minds captured by her perfectly balanced eye, she sets the mood of just being .
.
.
.
.
.
.
.
source: disturber
Her photographs have an unmistakable style characterised by visual essentiality, geometric rigour and rarefied charm; they are minimal and condensed, because they focus on the necessary – but at the same sensual, since always founded on the mental impressions of the form. A consistent creative path, that of the 22-year-old Tatiana Lëshkina – a Russian-born photographer who has been living and working for years in London – a path that has produced authentic jewels in chromatic elegance and the perceptive deception of the shapes. In this interview, Tatiana talks to us about her work and Spatial Practice, our second issue (to be presented on 21st June at X Marks the Bökship, Cambridge Heath Road, London), which she has curated by putting together authors with diverse sensibilities in the way they perceive the space and the landscape.
At the time you asked me to be the guest curator for Disturber, I was working on my dissertation and the subject of the publication quite naturally came out from my research. The idea was to create a publication with artists who work in various media but all have explored the poetics and politics of space at some point in their career.
That’s the best thing about it. Artists working with architecture are unlike architects free from the technical restrictions and the fact that spaces they build have to function and serve a certain purpose. I can’t think of a way to say it better than Juhani Pallasmaa who wrote: “The architecture conceived by artists is a direct reflection of mental images, memories and dreams; the artist creates architecture of the mind… The artist has always known, that the encountered, remembered and imagined are equal experiences in our consciousness; we may be equally moved by something evoked by the imagined as by the actually encountered”. I like to think of space in my work as a metaphorical mirror for mental states of the characters. I admire great set design in films and the way it can amplify character’s emotions. A great example would be Polanski’s Repulsion where there is this dialogue between Catherine Deneuve character’s psyche and the architecture she looks at. When I’m planning a photoshoot the first thing I usually do is find location that inspires me and then things go from there, sometimes i alter it and sometimes i bring in additional elements it all depends on the situation. That photograph is a self-portrait that belongs to the larger series that became a very defining body of work for me. Even if someone copied it I don’t really mind. As they say: imitation is the sincerest form of flattery.
.
.
.
.
.
.
.
.
source: vogueit
Tatiana is a visual artist and a fashion photographer. Detachment and the relationship between the spatial environment and the psychological condition of the individual are recurring subjects in her work. Born in the Soviet Union the year the Berlin Wall fell, she relocated to London at 18, where she received her BFA from Chelsea College of Art and Design. Her work has been exhibited in Europe and North America and appeared in such publications as Dazed & Confused, AnOther, I-D, Hunter and Metal. The artist has an upcoming book to be released this april published by Shabazz Projects. This project will document three years of an intimate personal and creative relationship with creative director and visual artist Erik Hart. This year will also see Tatiana’s first monograph which will be published by Editions du Lic. Tatiana is currently based between Los Angeles and New York.