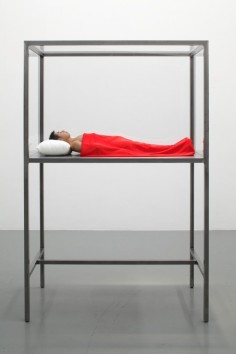 Conceptual artist He Xiangyu is perhaps best known for his headline-grabbing work The Death of Marat (2011), which featured a life-like resin sculpture of the corpse of Chinese dissident artist Ai Weiwei placed in the window of a German gallery. The title nods to the famous Neoclassical painting of French revolutionary Jean-Paul Marat by Jacques-Louis David, thereby elevating Ai to the status of a tragic hero. To create Cola Project (2009), an apocalyptic landscape of coal-like dark matter, He took over an entire lumber mill and employed a team of migrant workers to boil and reduce 127 tons of Coca-Cola over the course of a year. The piece has been read as a comment on the insidious nature of globalized consumer culture. He is an admirer of Maurizio Cattelan, and he shares something of Cattelan’s irreverence. “Nothing that isn’t allowed in China cannot not be done,” he has said.
.
.
.
.
.
.
.
source: whitecube

He Xiangyu is a conceptualist with a clear vision of the world as a philosophical playground. The critical language employed in his artworks quotes from global consumerism, Americanism and militarism, emphasizing the power of infinitesimal change. He uses the shape of a leaf to describe creative process: Starting at the stem it branches out in many directions before returning to a thin tip in the end.