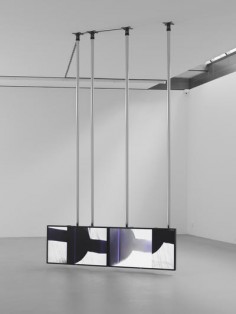 The work of London-based artist Hilary Lloyd features images drawn from everyday activities and is defined by its particular focus on British quotidian life. Lloyd typically presents her vision as a series of sequential images, most often depicting a lone individual working on a banal task. She thus takes on a range of isolated, commonplace people and things as her subjects: a carwash worker, highway construction site, boy taking off his t-shirt, and architectural structure, for example, all make appearances in her art. In Lloyd’s treatment, however, these ordinary images—which successfully capture the stillness and mundaneness of everyday experiences—take on uncanny qualities; whether the resulting tableaux are carefully staged scenes or the spontaneous products of Lloyd’s evident voyeurism is unknowable.

Lloyd’s process involves first taking a number of individual photographs of her chosen subject. Later, she compiles the images into a series and displays them in succession via video or slide installation. For Lloyd, the presentation of these sequential works is of utmost importance. Paying close attention to the aesthetics of the hardware (monitors, projectors, cables, and the like), Lloyd’s installations take cues from Minimalist art—the equipment informs or obstructs the viewer’s experience, often dictating his or her movements within the installation space.

Lloyd has been the subject of solo exhibitions at numerous major museums around the world including Kunstverein in Munich, Le Consortium in Dijon, Artists Space in New York, London’s Raven Row, and Basel’s Museum für Gegenwartskunst. She has contributed to various group shows including The British Art Show, the Gwanju Biennale, and the Lyon Biennials. In 2011, she was nominated for the Turner Prize.