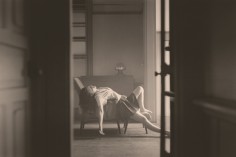 source: michaelhoppengallery
Hisaji Hara was born in Tokyo in 1964 and graduated from the Musahino Art University in 1986. In 1993 he emigrated to the United States and worked as a director of photography for television and documentary film before returning to Japan in 2001. The work in After Balthus was made over a period of five years commencing 2006.

For this series of beautiful, monochrome portraits Hisaji Hara has modelled his photographic compositions upon paintings by Balthus (1908-2001), one of the most revered and controversial artists of the twentieth century.

In the style of the Modern Masters, Hara creates scenes imbued with an unsettling combination of innocence and eroticism. The models have the light, unselfconscious attitudes of playful children and yet their postures invite the eye to see them as sexual young women. Moreover, in reinventing the pictures, Hisaji Hara has chosen to dress his teenage subjects in school uniform, thereby emphasizing the uncomfortable transitional period between child and adulthood. We feel as if we are the quiet, almost intrusive voyeurs to moments of youthful innocence.

Hisaji Hara is technically brilliant and very meticulous in his preparation for each image. The stage-set for these photographs is the derelict building of a privately run medical clinic used in the 1940’s and 50’s. In order to emulate the depth and eerie atmosphere found in Balthus’ paintings, Hara employs a number of techniques that transcend the use of photographic craft alone in order to mimic the skewed perspective of Balthus’ work, including smoke machines, specially commissioned furniture and unseen additions to his subject’s costumes to create a strange angularity to their dress. Hara’s camera skills are evident in the use of multiple exposures and focuses whilst partially blocking the lens to create unsettling depths of field, which only add to the mystery of the scenes.