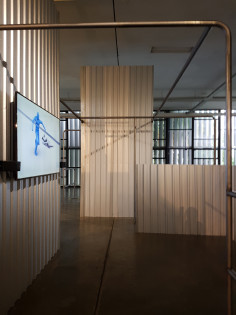 source: vanabbemuseumnl
Hito Steyerl is a film maker, video artist and writer. In addition to different (solo)exhibitions, her work was shown at the 2013 Venice and Istanbul biennales, the 2010 Gwangju and Taipeh biennales, the 2008 Shanghai biennale, documenta12 in Kassel in 2007 and Manifesta 5 in 2004. She is a professor of Art and Multimedia at the University of Arts in Berlin.
.
.
.
.
.
.
.
source: kow-berlininfo
Hito Steyerl was born in Munich in 1966. She studied in Tokyo, Munich, and Vienna before she moved to Berlin, where she lives and works today. As a filmmaker, visual artist, and author in the field of essayist documentary video, Steyerl is a frequent lecturer, has published influencial writings, and participated in numerous international exhibitions and biennials. She exhibited at documenta 12 in 2007 and in the German Pavilion at the Venice Biennale 2015.
.
.
.
.
.
.
.
source: bnlmtl2014org
Born in 1966 in Munich, Germany, Berlin-based artist and writer Hito Steyerl is one of the most critically acclaimed artists working in the field of video today. Her work straddles the borders between cinema and fine arts, and between theory and practice, exploring issues of militarization, the role of the media in globalization, and the mass proliferation and dissemination of images and knowledge brought on by digital technologies.

The Van Abbe Museum in Amsterdam recently presented her first large-scale mid-career survey show. In the last year, she has had solo exhibitions at both the Art Institute of Chicago and the Institute of Contemporary Art (ICA), London. Her work has been included in the 2013 Venice Biennale and Istanbul Biennial, the 2010 Gwangju and Taipei biennials, the 2008 Shanghai Biennale, Documenta 12, Kassel, in 2007 and Manifesta 5 in 2004. Her book The Wretched of the Screen, published by e-flux and the Sternberg Press (2012), has garnered critical attention. Steyerl is a professor of Art and Multimedia at the Berlin University of the Arts.